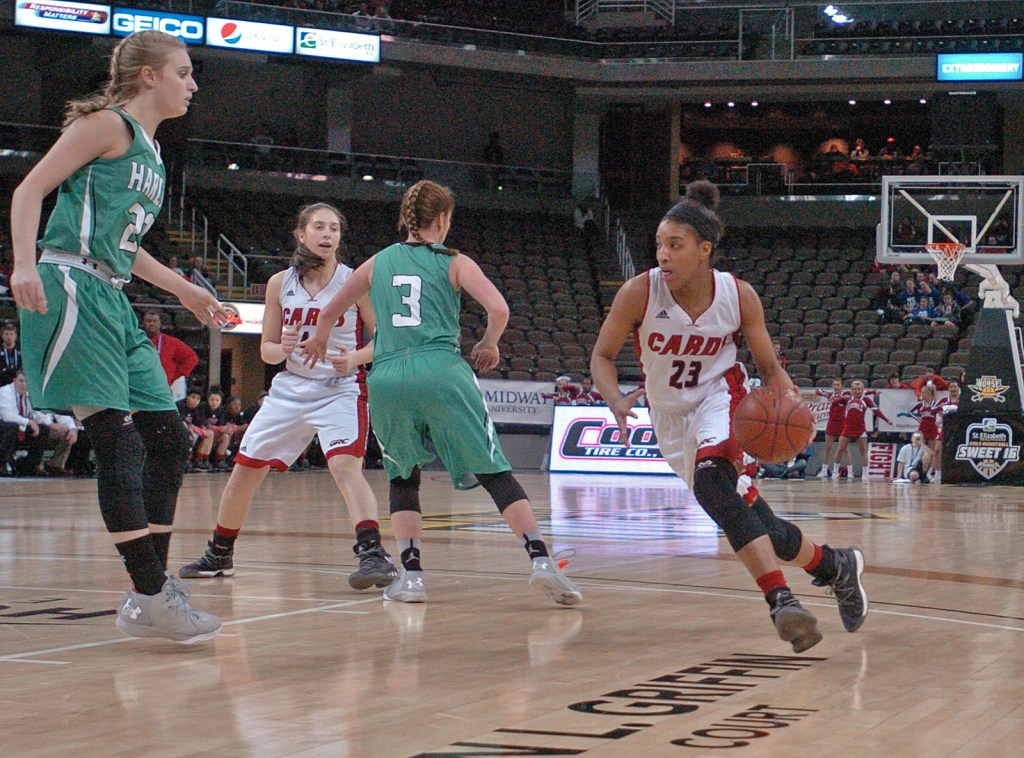 HIGHLAND HEIGHTS — The Harlan High School girls basketball had a plan coming into the first-round game of the Sweet 16 Wednesday night against George Rogers Clark.

The Dragons wants to limited GRC’s top scorer — Kennedy Igo — and compete on the glass.

The Cardinals proved why they’re so tough to beat by out-rebounding Harlan 35-20 and having four other players into double figures.

GRC won 81-61 to advance to the quarterfinal round of the state tournament.

The problem was that while Igo was held to seven points — below her average — GRC got 25 points from Sha’Maya Behanan and 16 points each from Maleaha Bell, Elizabeth Hardiman and Jasmine Flowers.

“There’s no one dominant scorer,” GRC coach Robbie Graham said. “It’s kinda pick your poison. If you stop this one, this one will pick up the slack. We’ve got four players averaging double figures. And we got another who is 9, almost 10. And a we got some players at seven and eight. We’re balanced and been there all year.”

The early going looked rough for the Cardinals, as Harlan came out hot from beyond the arc. The Dragons shot 85.7 percent from long range, making six of seven 3-pointers, in the first half. They were up 20-10 in the first quarter.

But the Cardinals chipped away and took the lead at halftime despite Jordan Brock’s impressive performance.

She finished with a game-high 38 points and kept the Dragons in the game even as the deeper, bigger Cardinals started to creep away.

“One advantage we thought we had a little more depth than they had,” Graham said. “We wanted to challenge shots. We wanted them to have to shoot over us. We really wanted to pound the glass and make it hard for them to get second shots and get on the offensive glass to try to get something easy for us.”

The Cardinals were able to do that in the second half, but perhaps more importantly, they started to get out in transition and beat Harlan down the floor. That was punctuated by Harrison’s block of a Brock 3-point attempt that led to a runout and a basket for Harrison.

“I thought she was going to knock it down, but then I had it (the ball) and I was just like, OK, let’s go,” Harrison said.

The difference started to show in the third quarter, when the Cardinals outscored the Dragons 19-8 — ending the period on a Bell 3-pointer at the buzzer, her second of the game.

The Cardinals also did a better job of getting the free-throw line. They shot 34 and made 29, while limiting the Dragons to just four attempts at the charity stripe.

Harrison had a big night, grabbing three steals to go with her 16 points while collecting seven rebounds and blocking a pair of shots.

Bell and Igo each finished with three assists.

Brock’s performance was nothing short impressive for Harlan. Her 38 points and cagey offensive play kept the Dragons around until the fourth quarter.