Nailed It or Failed it: Breakfast casserole wows Sunday school 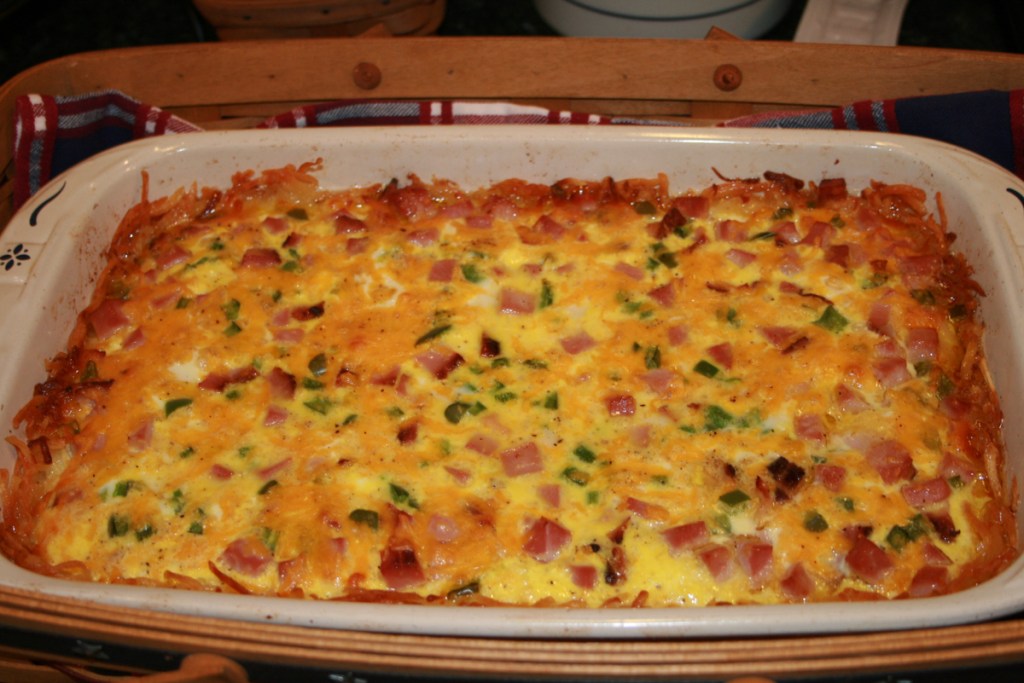 Once again it was my turn to provide a snack for our Sunday school class. I pulled out my recipe folder for breakfast food and found this recipe which was given to me several years ago by Pat, a former Sunday school member who had made the casserole for our class. I remember Brad liked it at the time and that’s why I’d requested a copy from her. In Pat’s notes to me she stated she had tripled the recipe to fit in a 9×13 pan so I decided to do the same.

I didn’t have all of the ingredients so I added them to my shopping list for Saturday morning.

When I got home from the grocery that weekend I put the bag of frozen hash browns in the refrigerator to thaw.

Sunday morning I got up early to get this casserole going. I pulled the hash browns out of the refrigerator and discovered they had not thawed like I thought they would. I rolled out some paper towels and spread out 9 cups of the potatoes to thaw. I really didn’t think this would take too long, but it sure took longer than I’d hoped. When it was time to get this thing going I just placed more paper towels on top of the potatoes and tried to squeeze as much moisture out of them as I could.

By this time, time was becoming an issue. I knew I had just enough time to get this dish in the oven and cook for a total of 55 minutes.

I poured the hash browns into the baking dish, spread them out and up the sides of the pan the best I could. I then melted the butter and drizzled it over the potatoes. Tripling the recipe meant I was using a lot of butter and I kept thinking “this is way too much.” I placed the hash browns in the oven and set the timer. When I removed the pan from the oven, the potatoes had browned a bit around the edges and I thought – boy that’s still a lot of butter. At that point I decided to try and sop some of the butter up with paper towels, because it butter was just standing in the pan and I didn’t want the dish to be soggy. I read part of the recipe again and noticed I needed to let the hash brown and butter mixture cool for 10 minutes – well I didn’t have 10 minutes, so after sopping up the butter, I poured the diced ham, green pepper and cheese in and spread it out, then I poured the egg mixture over top and placed everything back in the oven. After about 10 minutes I re-read the recipe and noticed that I was supposed to dial down the temperature a bit for the casserole to cook, so I turned the temperature to 350 and waited. After 30 minutes I checked the casserole. We needed to be leaving for church. The casserole wasn’t done.

About that time Brad came in to the kitchen and asked if I was ready — he could tell I wasn’t happy. I told him the casserole wasn’t done and I wasn’t sure it would get done. So we waited, and waited what seemed like forever. I was fussing to him about myself, saying I even got up early so this wouldn’t happen. It seems like every time I fix an egg dish for Sunday school, it never gets done when the recipe says it will be. I should know better by now and shouldn’t fix something like this or, I should fix it the night before and just heat it up before church. All the fussing in the world didn’t make me feel better or make the casserole get done faster. At about 9:15, I told Brad I’d check it one more time, if wasn’t not done, I’d turn off the oven and leave it and maybe it would be done when we get home and it would be all his (you guessed it – I don’t like eggs). Our classmates would have to settle for the muffins I’d also made for snack

When I opened the oven, and slightly shook the pan hooray, it was done. Now I just needed to get a couple of pictures and we could be off. The lighting in the house wasn’t great so we took the casserole out on the deck and got a photo. We headed to the car and off to Church we went.

When I got to Sunday school, everyone was patiently waiting for the food to arrive. Valerie cut the first piece for her husband, David, who gave his approval after one bite. Others in the class also commented that the casserole was good. When I thought everyone had served themselves I decided I should cut a piece for Brad, who helps with the fifth-graders during Sunday school. It’s a good thing I did, because almost all of the casserole was gone.

When we got home from church, Brad decided to eat his piece of the casserole as a snack before lunch was ready. He agreed with my classmates that this casserole is a winner.

I nailed this recipe and it’s headed to my self-made cookbook, along with a note to start early and bake at least 15 minutes longer.

Thaw potatoes between layers of paper towels. Press into bottom and up sides of ungreased 9 inch pie plate. Drizzle butter over top of potatoes. Bake at 425 degrees for 25 minutes. Remove from oven and cool for 10 minutes. Combine ham, cheese, and green pepper and put on top of potato shell. Whisk eggs, milk, salt, and pepper and pour over ham mixture. Bake at 350 degrees for 30 minutes or until set.