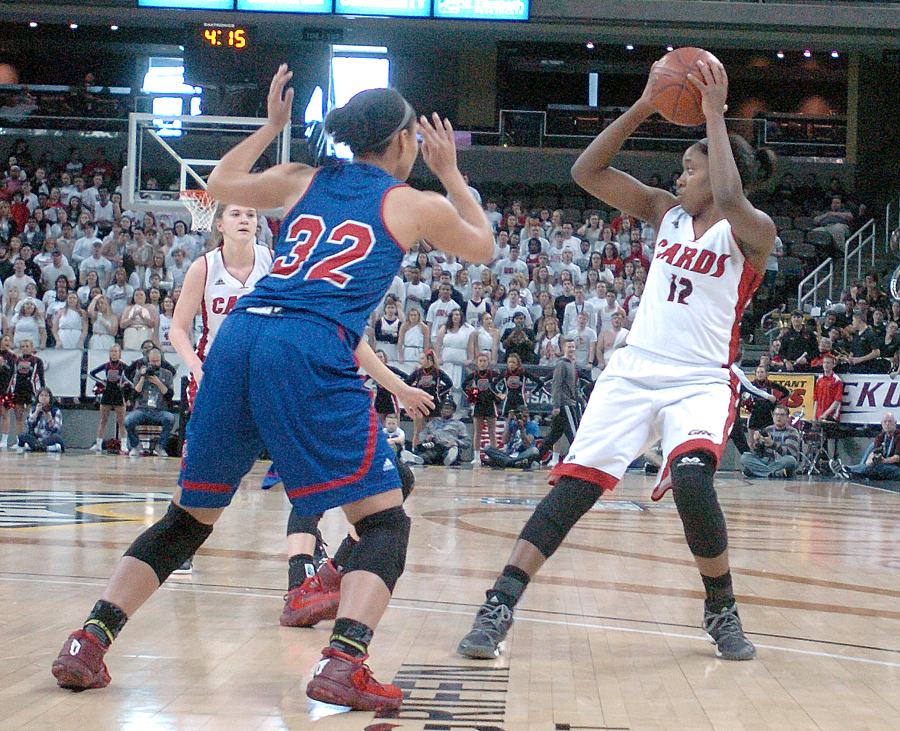 HIGHLAND HEIGHTS — The first two minutes of the fourth quarter of Friday’s Sweet 16 quarterfinal matchup between the George Rogers Clark High School girls basketball team and Mercer County probably couldn’t have gone any worse for GRC or any better for the Titans.

Mercer used that boost in momentum to pull ahead — and stay ahead — for a 58-47 victory and a spot in the state tournament’s final four this weekend.

The Cardinals had been riding high though the first three quarters. They led at halftime, 31-30, and thanks to a Kennedy Igo 3-pointer just before the buzzer, they were up 43-39 going into the final period.

That’s where things unravelled for the Cards (30-5) and Mercer (29-6) leaned on Seygan Robins, who scored a game-high 26 points.

“In the fourth quarter, I think we ran out of gas a little bit,” GRC coach Robbie Graham said. “Their superstar played like a superstar. She’s a really good player. There were about five or six possession where she just took over.”

By the six-minute mark of the fourth quarter, the game was tied at 43, the Cardinals had been whistled for five fouls and they had failed to score.

Sha’Maya Behanan’s layup at 5:48 tied the game at 45, but the  damage was done — the Cardinals were limping along with serious foul trouble.

Meanwhile, the Titans, who used a full-court press for the majority of the fourth quarter, were whistled for a foul just once in the period.

In all, Mercer shot 32 free throws, converting 22. The Cardinals made just 10 trips to the charity stripe in the game, making eight.

It was in stark contrast to GRC’s opening-round win over Harlan, where the Cardinals got to the line 34 times.

“I felt like we were attacking the basket,” Graham said. “Or maybe we weren’t going as hard as we were the other night. We felt good about going to the rim. For whatever reason, we weren’t getting the foul call.”

The backbreaker came at 3:47 left to play. Igo was leading GRC in transition with her defender backpedaling in front of her, she attacked the rim. She made the basket, which appeared to be an ‘and-one’ opportunity sending her to the line for a possible 50-49 GRC lead.

But the whistle was a charge against Igo — her fourth — which waved off the basket. The Titans now had a lead and chose to dribble off nearly 90 seconds of clock before getting a layup with 1:30 left to play.

“Kennedy had that one drive that we thought was an and-one and it ends up as a charge call, that is what it is, but they go down and score,” Graham said. “It was a crucial swing.”

With a four-point lead late, the Titans were in control.

“We missed a couple easy ones there in the fourth quarter and they came down and converted and the momentum swung,” Graham said. “We were playing catch-up at that point.

“You can’t leave points out there against good teams like that. You have to convert and score.”

The offense stalled, adding to the Cardinals troubles late. They scored just four points in the final period.

The Titans out-rebounded the Cardinals, 32-24, a rarity for GRC who has won the battle of the boards in most games this season. Mercer finished with 15 second-chance points.

“We talked at halftime about doing a better job rebounding,” Graham said. “There were a lot of long rebounds, and they were just a step or two quicker than us getting to those. They converted on a lot of those offensive rebounds, which were back-breaking plays.”

Robins had 26 to lead all scorers. She scored 11 of those on the free-throw line. Emma Souder, who had a double-double at halftime with 11 points and 11 rebounds finished with 17 and 15. No other Titan had more than four points.

The Cardinals were led by Igo, who put in 18 points. Behanan finished with nine points and six rebounds.