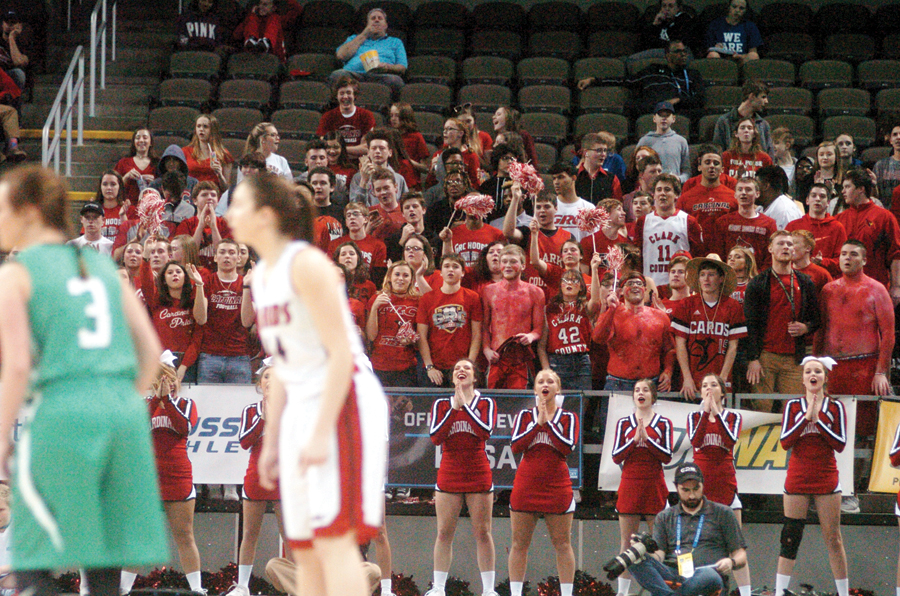 Unless you’re a glass-half-empty sort of person, you’d have a hard time looking at the local basketball scene and come away with anything other than positives feelings.

There was a lot to like about basketball in Clark County this past season, and very little to take issue with, let’s take a look at some of those:

If you liked the way things looks in the 2016-17 year, then you’re probably going to enjoy next season, too.

Both prep teams were very young. The George Rogers Clark High School girls and boys teams had just two seniors combined. Both of those were key members of the girls team’s run to the state tournament quarterfinals — veteran reserve guard Kylee Murray and starting center Elizabeth Hardiman. Both logged a lot of minutes for a 30-win team.

Still, most everyone else was a sophomore or freshman. The elder statesman on next year’s club? Sha’Maya Behanan is the only projected senior. So the girls might not just look similar next year, but years to come.

And if you wanted a glimpse even further into the future — seventh-grader Tyra Flowers played 10 minutes on NKU’s floor during the state tournament, scoring two points and grabbing three rebounds.

If you’re a fan of reruns, the boys team might have something for you. The Cards project to return everyone from a 20-win team that was district runner-up and made its first region tournament appearance since 2014.

The story will change next year when the team will boast nine seniors and seven juniors.

Those players don’t compete in a vacuum. And GRC is blessed with a pair of good coaches.

Girls coach Robbie Graham completed his fifth season at the helm and his fourth winning season. He surpassed the 100-win mark during the year with a win over Lexington Catholic.

He also had his second state tournament appearance.

Josh Cook took over the reins back in August and finished his first year with a 20-13 record. While the team he inherited had little in the way of experience, he always seemed to have the Cardinals prepared. You felt like they could come away with a win on any given night, regardless of the opponent.

Clark County — and the rest of the 10th Region — will have an eye on what Cook can do with a more seasoned corps.

Star on the rise

After the GRC girls’ region tournament semifinal win in Harrison County, I walked past the Nicholas County student section and overheard a Nicholas supporter say, “I want Kennedy Igo’s autograph. She’s just a freshman and she dropped 27 points on us.”

Nicholas wasn’t her only victim. State champion Mercer County focused on the GRC freshman in the state tournament meeting between the two teams and Igo still managed 18.

She’s fiery and intense on the court, and her energy somehow seemed to rise as the season went on. The deeper into the postseason the Cardinals got, the more often she seemed to rise to the moment.

She had 22 in GRC’s region tournament final victory over Mason County.

But as a testament to the Cardinal’s depth, you can’t expect to stop Igo and get a win. They have too many weapons, as evidenced by GRC’s win over Harlan to open the Sweet 16. Igo had seven, but Behanan poured in 25 and three other players had 16 points each — Maleaha Bell, Jasmine Flowers and Hayley Harrison.

So, in the words of coach Graham, “Pick your poison.”

No season can be perfect, and you take the sum over parts of the whole. But some negatives are hard to ignore.

Harrison County is a great geographic location for the region tournament, sitting about midway for most schools — and it’s definitely better than driving all the way to Campbell County.

But the staff manning the scorer’s table opted to not update the scoreboard with personal fouls. That’s fine for some regular season games — though the excellent volunteers at GRC games do a fine job year-round — but a region tournament? That’s a requirement, I believe.

Sure, the player committing the foul is announced, but if you could hear the announcer above the noise of the region final crowd this year, you have far better hearing than I.

But it wasn’t difficult to hear Mason County fans in that game — the Royals and Cardinals both had solid support for the championship game — but a handful of Mason fans chose the moments following the Cardinals’ electrifying win to voice their displeasure with the GRC bench.

I get you’re upset, but have some class. Ruining a special moment for high school student-athletes does little more than embarrass everyone involved. While most Mason fans — and the members of the team — conducted themselves well, the vocal minority was the apple that spoiled the batch.

If there was a better crowd at the state tournament than GRC’s, I didn’t see it.

The crowd didn’t just fill out seats, either, as the fans lived and died with their Cardinals on the floor against Harlan.

It was even better on Friday as the Cardinals fell to the eventual state champs.

“We had a tremendous crowd today.,” GRC coach Graham said after the quarterfinal round loss. “Our students showed. Our fan support was great. They really got behind us. We’re really proud of that.”

And while I’ve not heard every pep band across the state, I’d feel pretty confident putting GRC’s up against any of them. Those students did an outstanding job all season and really represented the school well during the postseason.