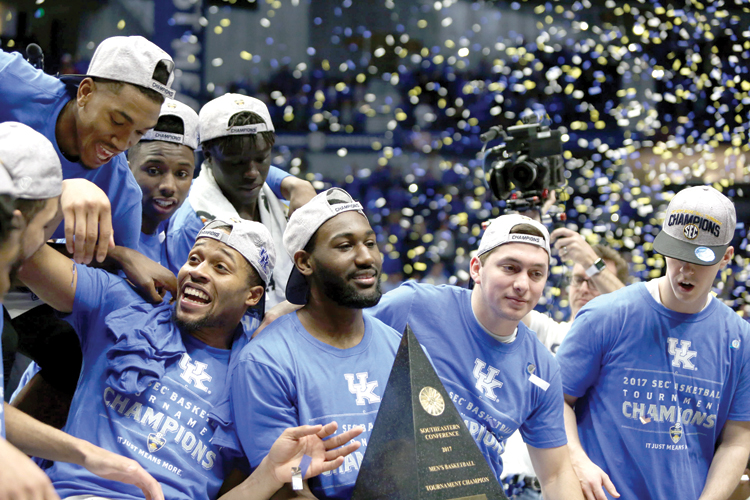 NASHVILLE — For a school now known for its one-and-done stars, Kentucky relied on a different formula to win another Southeastern Conference Tournament championship Sunday.

Kentucky got another sensational effort from senior Dominique Hawkins, a big game from senior Derek Willis, and solid play from senior Mychal Mulder and sophomore Isaac Humphries to open a 42-30 halftime lead and went on to beat Arkansas 82-65.

Hawkins had a career-high 14 points on 5-for-9 shooting from the field, four steals, two assists and two rebounds in 27 minutes. He also drew two charges.

“All three games (in the tournament), and really late in the season, it’s almost like waiting to put him in the game. Something has to happen, so hurry and put him in,” Kentucky coach John Calipari said after Hawkins along with MVP De’Aaron Fox and Bam Adebayo were named to the all-tournament team.

Kentucky has played in the SEC tourney title game the past four years and now won three in a row. But this was different for Hawkins.

“I’ve never had a role as I did today and felt I took advantage of my playing time today,” Hawkins said.

He did. Fox said Hawkins proved he belonged on a national stage just in case anyone wondered.

The best thing is Willis and Mulder also played well as did Humphries and Wenyen Gabriel. Calipari said Willis, Mulder and Hawkins, all seniors, are playing the best they have in their Kentucky careers at just the right time.

Calipari likes the way the bench is producing going into NCAA Tournament play.

“When you have a deep bench going into this tournament, you have more room for error, injuries, foul trouble, bad play, a guy gets sick. When you have five, six guys and that one guy goes down and you’re deep into your bunch, you’re losing,” Calipari said. “We’ve got a deep bench, which means if you have a bad game, let’s try to win and move on. You play better next game. That’s what’s nice about being deep, having a deep team.”

It’s also nice that the stars are starting to all click at the right time. Fox came off his career-high 28 points against Alabama Saturday with 18 points, three rebounds and two assists. Malik Monk was just 1-for-5 on 3-pointers, but he had 17 points, three assists and one blocked shot.

Maybe the most important note is Adebayo’s consistency. He had 17 points, nine rebounds and one blocked shot. That gave him 40 points and 28 rebounds in three SEC games — averages of 13.3 points and 9.3 rebounds per outing.

“We’re on a positive roll. We’re all confident and believe in each other. We’re sticking together as brothers,” Adebayo said.

Kentucky certainly did late in the game when Hawkins and then Fox were hammered with flagrant fouls that resulted in one ejection. The testiness started before the game when an Arkansas staff member seemed to be taunting Monk, an Arkansas native. Monk later twice did the “throat slash” while facing the Arkansas bench.

Monk said he didn’t remember exactly what was said before the game.

“He’s saying stuff before the game, we were warming up, and they were talking and talking. It’s Arkansas. I don’t know. I made a 3, emotions took over, made a little like the game was over. I mean, I just got to learn from that,” Monk said about his throat slash move. “We knew it would be a physical team. Coach Calipari told us that before the game. We just had to keep our composure and stay together as a team, and that’s what we did.”

Calipari insisted he knew nothing about the pregame exchange and did not see Monk’s throat slash or he would have talked to him then.

“I took he and De’Aaron out because it got rough. I didn’t know — what you said I just heard for the first time. But obviously, when it really got rough, not one of my kids moved. They huddled together. None of them came back at anybody. Class,” Calipari said.

“When it got rough, there was no back-and-forth by my team. That’s poise. And when you’re talking 18- and 19-year-old kids having that kind of poise, your first response is to go after somebody. They didn’t.”

However, Calipari does not want Monk to repeat his antics.

“No need for that and there’s no place for that in what we’re doing and how we’re teaching at Kentucky,” Calipari said.

Arkansas coach Mike Anderson also claimed he did not see what Monk kid.

“I’m glad our guys didn’t do it. I didn’t see it, so I don’t condone that,” Anderson said.

Calipari said going into the SEC Tournament that his team needed punched in the mouth — “I didn’t mean it literally,” he said Sunday — and now he likes where his team is going forward.

“This is a talented group. I know they say there are other teams more talented. I’ll take mine. Let me start right there. I will take mine,” Calipari said. There are more veteran teams and physical teams, but this team …

“The whole key to us will be defense. If we continue to guard, we’ll have a nice little run. We’ll see what happens. But that’s where we’re — our defense is what we are. And I don’t worry about offense with this group because we’re so — we’re fast, we can shoot it, we can post it, play pick-and-roll, play against zone. Derek Willis stretches the defense. Wenyen is playing better now.

“But if we don’t defend, we’ll lose real fast, like real fast. We guard and play with great energy and disrupt and do the things we’ve been doing, it should be a fun NCAA Tournament.”