Nailed It or Failed It: Brisket dish proves to be a slam dunk 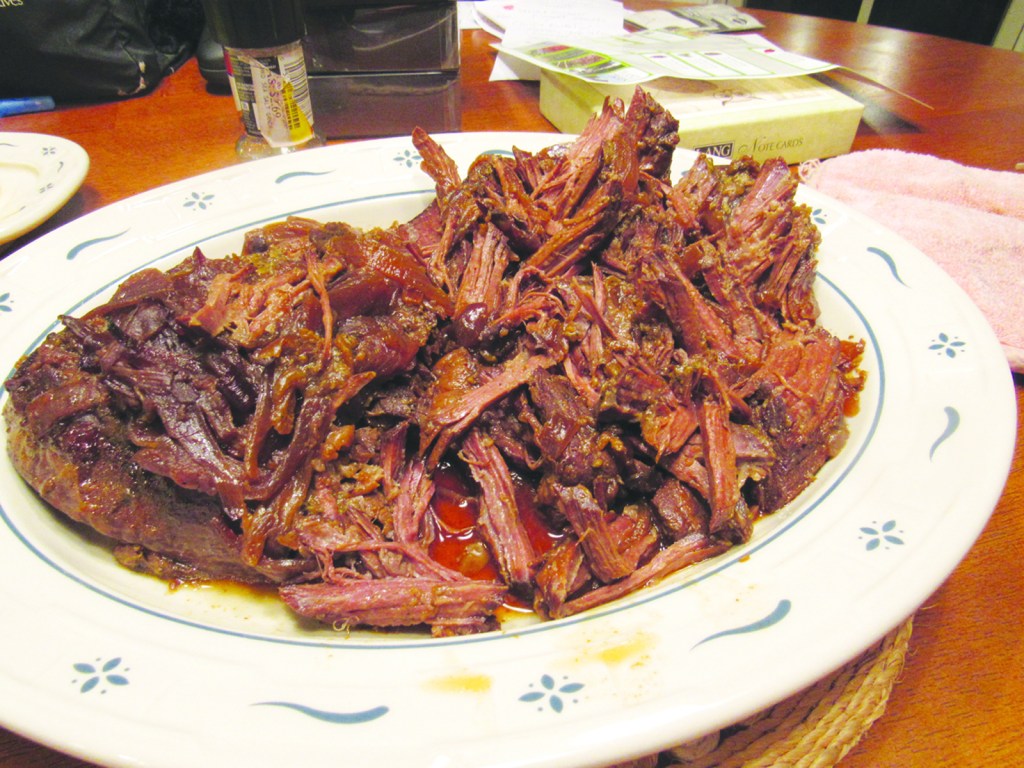 I was doing my normal Saturday morning grocery shopping and saw a London broil in the reduced meat section.

I remembered having a brisket recipe that I found while scouring Pinterest at www.countrycleaver.com and thought this cut of meat would be the equivalent.

However, when I started writing this article I decided I better check my facts. Boy was I wrong. I did a quick search on the internet and was informed that London broil isn’t a cut of meat, it’s a cooking method — even though some meat departments label the meat London broil, it’s a top round roast.

Brisket on the other hand is a tough cut of meat that is typically marinated and slow cooked. OK, now that we all have that straight I’ll get on with my experience with this recipe.

Oh, one other thing, I have no idea why this is called Homesick Texan’s Sunday Brisket. There was no explanation with the recipe when I found it. I guess that some former Texan’s mom or granny used to make it.

I initially thought I’d prepare this meat dish for supper on Sunday. But after getting home from church and reading the recipe, I realized I would not have time to prepare it, let it sit for an hour, and then cook it for 6 hours and be able to have our meal before 7:30 or 8 p.m. I didn’t want to eat that late — again. So I decided I’d hold off preparing this dish until Monday when I was off work.

I wanted to have supper ready at about 6:30, thinking Brad would be home from work by that time. I did some figuring and decided I needed to start preparing the meat by 11 a.m.

The recipe calls for a three to four-pound brisket and my London broil was only two pounds. Because of the size difference I adjusted the seasoning portion of the recipe to half of what was called for.

At this point I noticed that my meat didn’t have a fat side but I really didn’t think that much about it. The amount of seasoning I prepared covered the meat perfectly on all sides. I placed the meat on a plate and let it rest for an hour.

While the meat was resting, I sliced up an onion and sautéed it in the oil in my large dutch oven (a wonderful piece of kitchen cookware by the way). It took a while for the onions to brown on the tips, longer than I expected. When they were ready I added the rest of the garlic, measured 1 cup of beef broth and poured it in. There was a little bit of broth left in my 10-ounce can but instead of wasting it I just poured it in with the rest of the broth; I didn’t think a little extra would hurt anything.

When the meat had rested, I moved the onions to one side of the dutch oven the best I could and slid the meat in.

I then scooped the onion mixture on top, took a picture, put the lid on and placed it in the oven. I was good on time and the meat would be ready by around 6 p.m.

When the cooking time was up, I removed the meat from the oven, lifted the lid and started shredding the meat.

Before I shredded too much, I glanced at the recipe and realized the whole thing needed to rest so I put down my forks and put the lid back on, even though the recipe says to leave the lid off. I guess I skipped reading that part. This gave me time to finish getting the side dishes ready for our meal.

When the meat had rested I decided, for presentation purposes, I’d remove it from the dutch oven and then shred it. The meat was tender and was very easy to shred. The onions had cooked down and just mingled with the meat.

One bite and I was convinced that using the London broil worked fine; I think it would also work using a chuck roast — yum, yum, yum. This dish was tender and delicious. After one bite, Brad gave it his vote of approval saying “I wouldn’t mind having this again.”

I did not make the horseradish jalapeno sauce to go with this dish, but Brad likes horseradish and did put some on his portion. He said it was good.

I nailed this recipe and it’s headed to my overflowing, self-made cookbook.

To make the brisket, mince garlic, and combine 2 cloves worth of garlic with salt, pepper, cayenne, molasses, and mustard into a small bowl and stir to form a paste. Rub all over the brisket and allow the brisket to rest on a plate, unrefrigerated for 1 hour.

In an oven proof pot or Dutch oven, heat oil over medium high heat, add the onions and cook until they begin to just brown at the tips.

Add the remaining garlic and beef broth and scrape the bottom of the pan of any stuck bits.

Add the brisket, fat side up, and spoon onions on top of the brisket. Cover the pot and place in the oven for 5-6 hours, until the brisket falls apart with a fork.

To serve, uncover the pot, and allow the brisket to rest for 20-30 minutes before serving.

Stir to combine all ingredients.