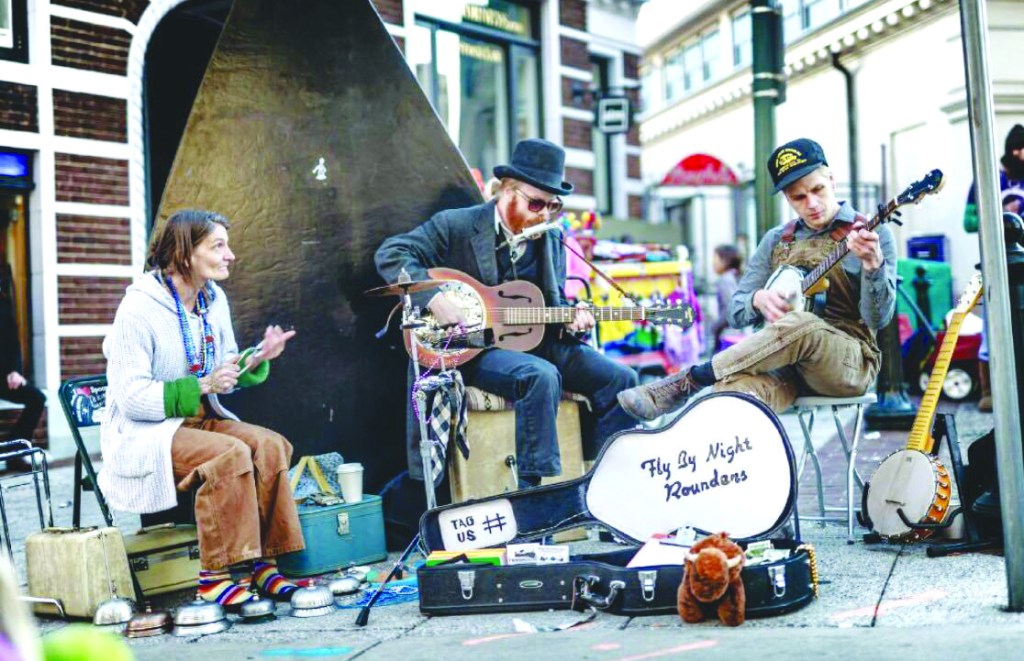 The Fly By Night Rounders will perform Saturday at the Engine House Deli + Pub. The Asheville, North Carolina-based trio of Abby the Spoon Lady, Chris Rodrigues and Vaden Landers, will perform at 9 p.m. (Photo submitted)

The first Saturday of spring offers a couple opportunities to partake in different parts of the art realm.

During the day, First Christian Church will host its first artisan fair at the church, 24 E. Hickman St. All of the 23 participating artists are from Clark County, the Rev. Jerry Johns said.

“What we wanted to do is highlight what local artists can do,” he said. “There’s a wide variety.”

Among those scheduled to be at the church include painter Phil May, Randy Whisman who makes wooden bowls and utensils, Haley Burns who makes soap and Molly Stotts, who will be spinning wool throughout the fair.

There will also be stained glass items there, he said.

The artists and craftsmen will have items for sale or for order, he said.

“We don’t know what to expect,” Johns said. “We hope people show up. It’s going to be crowded inside.”

The trio of Vaden Landers on guitar, Chris Rodrigues on guitar and Abby “The Spoon Lady” Roach on spoons are coming to Winchester on the recommendation of a local fan.

The three have been playing together for about a year, Landers said, and just released their first album called, “That Ain’t Bluegrass.” The album’s songs are all in the public domain, often about “trains and corn liquor and playing music and having a good time,” he said. “We play pretty much country blues.”

Landers said he and Rodrigues each performed with Roach before they all got together as a group.

“Chris and Abby played for a year as a duo,” Landers said. “Then Abby and I got together and played with a band called The Shifty Drifters.”

After the band broke up, Rodrigues happened by where Landers and Roach were playing. “That was it,” he said.

The group is one of the mainstays of Asheville’s street music, or busking, scene, though they have been traveling more as their fame spreads.

“We’re trying to take it slow,” he said. “We have seven weekends in a row where we’re traveling out of state.”

The Engine House is at 9 W. Lexington Ave.