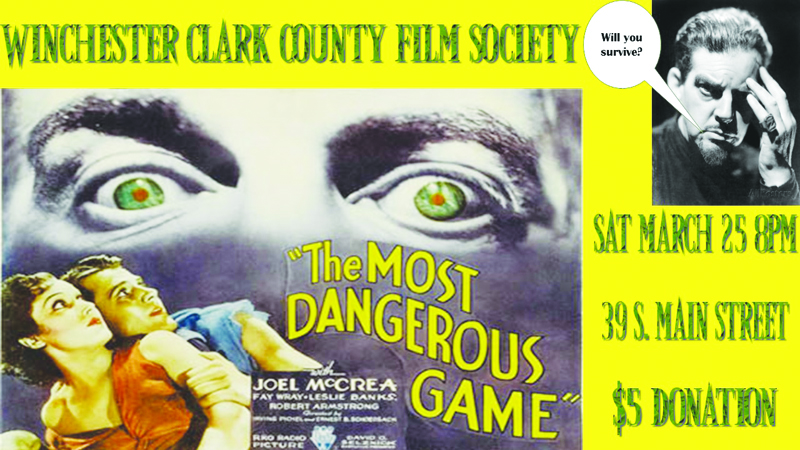 The Winchester-Clark County Film Society will host a screening of “The Most Dangerous Game” at 8 p.m. Saturday at 39 S. Main St.

The story finds viewers being shipwrecked on a mysterious island to be taken in by the sadistic and eccentric Count Zaroff.  Before they know it, they are running through the jungle in a game of cat and mouse due to the bored Zaroff wanting to hunt humans.

Film Society President Rick Baldwin said that while the title has been adapted many times, many cinephiles believe the original was the best version.

“The reason I chose ‘The Most Dangerous Game’ is that it was my plan to tie into two other separate events occurring this month,” he said. “I felt that that the fierce competitive drive of the popular March Madness tournament, would play nicely into the film’s title and subject matter. Also, ‘Kong: Skull Island’ was just released and several cast, crew, and sets used in ‘The Most Dangerous Game,’ were actually used in the production of the original ‘King Kong.’

“I was always a fan of the Connell’s story, and I believe this film will entertain film and literature lovers alike. The film screening will be of the original black and white version and not the colorized print, which I feel is completely unneeded. I enjoy black and white because it makes your imagination fill in the blanks. If the film is good, you shouldn’t even realize the absence of color because it is supplemented with a solid plot and effective elements of mise-en-scène.”

Admission is $5, and all donations go towards the film society in its goal to launch the first Winchester Independent Film Festival in 2018.