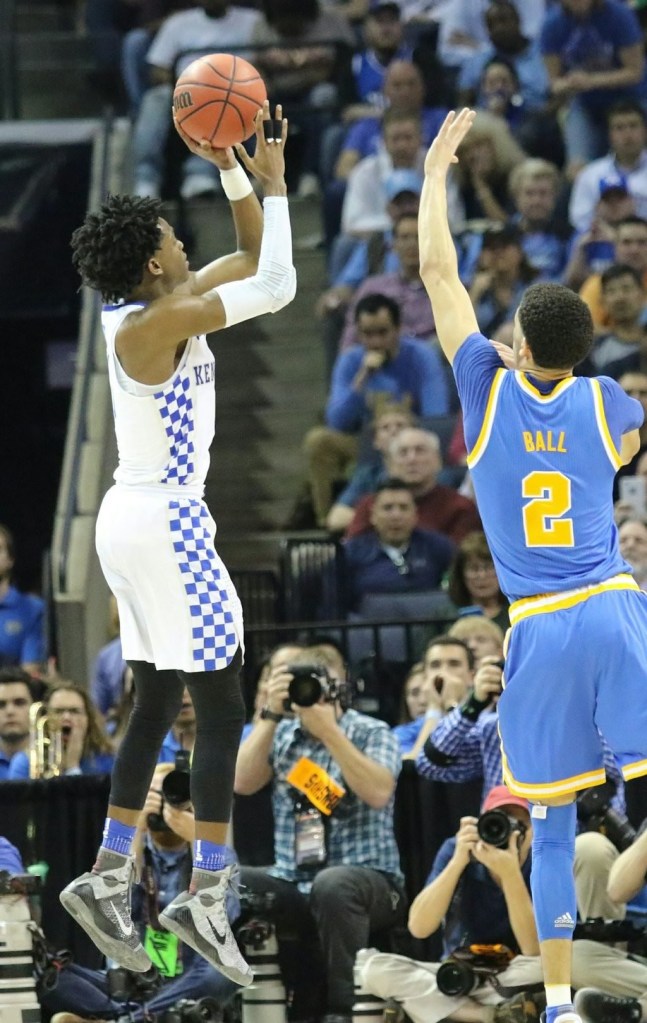 MEMPHIS — Kentucky got revenge against UCLA and will have to beat North Carolina for a second time this season to reach the Final Four.

De’Aaron Fox scored career-high 39 points to lead the Wildcats to an 86-75 win over the Bruins Friday night in the South Region semifinals at FedExForum. Kentucky will take on No. 1 seed North Carolina, which defeated Butler 92-80 in the first of two South Region semifinal games Friday night. The Wildcats (32-5) edged the Tar Heels 103-100 in the CBS Classic in Las Vegas earlier this season.

It marked Kentucky coach John Calipari’s first return to Memphis in more than eight years. Prior to taking over as coach of the Wildcats, Calipari spent nine seasons at Memphis, where he compiled a 214-68 record. Calipari, who has led Kentucky to the Sweet Sixteen in six of his eight seasons at Kentucky, improved to a perfect 6-0 in regional semifinal games.

The two schools have combined for 19 NCAA championships, with UCLA leading the way with 11, but the Bruins haven’t won title since the 1995 campaign, while the Wildcats have won two championships in the past two decades, the most recent coming during the 2012 campaign. Kentucky is one win away from making a third trip to the Final Four in four years.

Fox scored Kentucky’s first eight points and led all scorers with 15 in the first half. Ball had just six points in the opening half, while freshman classmate T.J. Leaf carried the load for the Bruins with 13 points. Leaf and Issac Hamilton led the Bruins with 17 points each, followed by Bryce Alford with 13 and Ball with 10.

Malik Monk took over in the second half and scored 10 of Kentucky’s first 14 points of the half. The spurt by Monk, which included two 3-pointers, helped the Wildcats build a 50-46 lead with 15 minutes remaining and lead that evenually blossomed to double digits.

Monk followed Fox with 21 points, scoring 14 of those in the second half. Kentucky senior and Madison Central graduate Dominique Hawkins sank three 3-pointers and added 11 points off the bench. Hawkins has scored double figures in two of Kentucky’s six postseason games.

The Wildcats offset UCLA’s size in the post with timely shooting, especially from behind the arc. Kentucky made 10 3-pointers to make up for the lack of scoring in the post. Kentucky forward Bam Adebayo, who had tallied double figures in the previous 10 games, finished with just two points against the Bruins. Adebayo didn’t score his first bucket until he threw down a dunk with 3:15 remaining.

North Carolina’s top priority will be containing Monk, who scored a career-high 47 points in the first game between the two foes earlier this year.

“They scored three more points than we did, and we didn’t play very well on the defensive end,” North Carolina coach Roy Williams said.

Prior to his team’s game against the Wildcats, Bruins coach Steve Alford offered praise for Fox, Monk and Adebayo, all three of whom are projected to be NBA lottery picks this summer.

“They’re top of the food chain,” Alford said. “We’ve got great respect (for them). … Those three are very special. They’re very elite and those are the three reasons (and) there’s many more reasons, but those are three very good reasons why (the were) in the position they’re in.”

Ball also is projected to be a top pick in the draft.

Despite his team’s loss, Alford, mentioned as the top candidate to replace recently-fired Tom Crean at Indiana, was happy with his team’s finish. The Bruins ended his fourth season at the helm with a 31-5 record, with wins over Kentucky and Arizona during the regular season.

“I love this team (and) the character of this team has been phenomenal,,” Alford said. “The blending of the vets with the new guys has been a lot of fun to see that happen, all the way back from the summer months when we were getting ready (for the season). When you’re a part of that, you don’t ever want it to end.”

Keith Taylor is sports editor for Kentucky Today. Reach him at keith.taylor@kentuckytoday.com