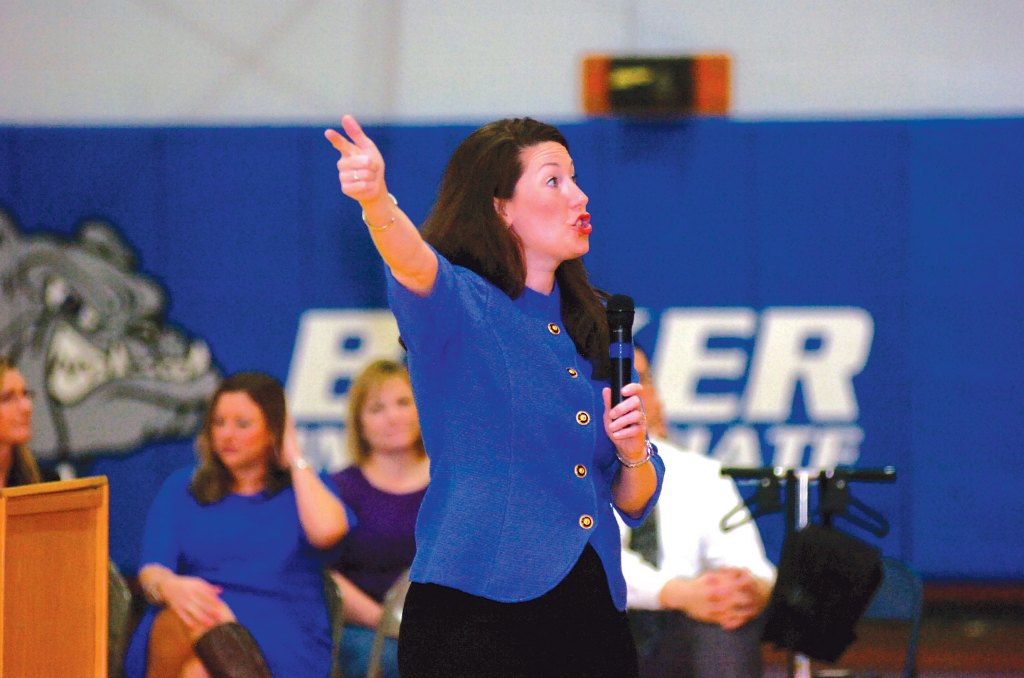 Kentucky Secretary of State Alison Lundergan Grimes visited Baker Intermediate School Wednesday morning to talk to students about the functions of her office and enlist them in creating a public service announcement on the importance of voting.

Grimes, a Democrat who is serving her second term as secretary of state, used student volunteers to demonstrate that 70 percent of Kentuckians are registered to vote, but of that number half or fewer actually commit to going to the polls on Election Day.

Together with Baker staff and the students in attendance, Grimes shot a PSA video encouraging all Kentuckians to go out and vote.

Grimes also discussed her work with students, which covers overseeing elections, acting as the chief business official in the state and encouraging civic engagement among Kentuckians.

One way Grimes has tried to make SoS services more available to the general public during her tenure has been to offer more of them online through sos.ky.gov. Grimes even spearheaded online voter registration in Kentucky through the website govoteky.com.

“The 30 percent of Kentuckians who aren’t registered to vote are the youth and minorities,” Grimes said. “So we took the process online. You can now avoid all that paper and go straight to online where you can register to vote.”

And while the fifth- and sixth-graders at Baker don’t yet qualify to cast a ballot, Grimes said there was plenty that they could do to support the democratic process.

Grimes’ visit to Baker coincided with the school’s college and career readiness week, where staff and visitors encourage students to become active in their community.