Where in the World? The life and times of well-digger John Robert Shaw 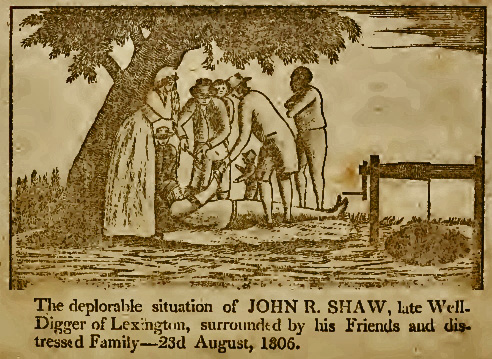 I  like to read and am especially fond of writers who can make me laugh. Among my favorites are P. G. Wodehouse, David Sedaris, Gerald Durrell (brother of more famous Lawrence) and Bill Bryson.

Bryson’s “Walk in the Woods” led me to a whole series of his autobiographical comedies. He introduced the misfit Katz, with whom he hiked the Appalachian Trail, in the uproariously funny “Thunderbolt Kid.”

One of the most hilarious reads I have discovered of late was written at a surprisingly early date. “A Narrative of the Life & Travels of John Robert Shaw, the Well-Digger” was published by John Bradford, editor of the Kentucky Gazette, in 1807.

Born in England, Shaw joined the British army and came to America in 1778. He described his plights with the military from Rhode Island to South Carolina. He stayed on after the war, trying desperately to assimilate in the fledgling nation.

Our preeminent historian, Dr. Thomas D. Clark, praised the book. He wrote, “The peripatetic Yorkshireman found his way to Lexington, where fortune, but not fame, avoided him. Shaw was a man who found solace in a bottle. Well digger, turnpike worker, dam builder, and faithless husband, he lived out his turbulent life in and near Lexington.”

The best way to get acquainted with Shaw is to sample his remarkably accessible prose. In one episode after the war, he went on a drinking spree with a friend in Philadelphia. At the “Sign of the Three Jolly Irishmen,” they started off with a gallon of wine and a quart of whiskey, “in the punishment of which we were joined by half a dozen fine girls with a piper and fiddler.” The group broke up late that night “pretty well done over.”

He continued, “Being determined to enjoy the pleasures of the night as well as the day, I proceeded with my doxy to her lodgings” and “was invited upstairs into a room, with a good bed and otherwise fully equipped for entering on the wars of Venus.”

There he would learn that his lassie was a trickster.

“But alas! How disappointed were my hopes; for when ready to jump into the arms of my fair one, I unfortunately, at her request, stopped to put the candle out, when lo! the floor sunk, and in a few seconds I found myself safely landed in a back street, with no other covering to guard me against the inclemency of a cold winter night, than my shirt.”

Each chapter begins with an outline of its contents: “Chapter 9. The author proceeds to Frankfort — experiences a variety of vicissitudes and works at different places until he arrives at Lexington; at which place and its vicinity he meets with a number of adventures, particularly that of seeing a vision, and likewise the anxiety of mind which he laboured under from an excess of spirituous liquors and the result thereof — swindled by Prothroe — was blown up — loses the use of one eye — proves the infallibility of bletonism [water divining or dowsing] — blown up a second time — gets married — has a son — a daughter — another son, etc.”

In his adopted professions of quarrying and well digging, Shaw used quantities of black powder to “blow rock” and succeeded in blowing himself up multiple times. In 1806, the Gazette published his obituary:

“John R. Shaw, of Lexington, killed Saturday, August 17, 1806, by a blast being used in a well for Lewis Sanders, near Lexington”

However, he came very close. This was the fourth time he had blown himself up and his injuries were described by his attending physician, Dr. James Fishback, in a letter to the Gazette. Shaw suffered a fractured skull, a broken eye socket, broken shin bone, left arm broken with the loss of two fingers, right arm broken in two places, as well as “considerable injury of the hand, the skin upon the breast, and stomach was very much bruised and cut, from which I inferred he was leaning nearly over the blast. The surface of his remaining eye ball was considerably bruised and torn by a number of small pieces of stone, in addition to the above, his face was enormously swelled and covered with blood, gunpowder and dirt, so that it was utterly impossible to recognize the lineaments of John Robert Shaw.”

In spite of his dire injuries, Dr. Fishback noted “ultimately the wounds healed in the most friendly manner.”

Shaw’s story does have a Clark County connection. In the course of his travels he did a job for Hubbard Taylor at Spring Hill on present-day Colby Road.

“I then proceeded on to Mr. Hubbard Taylor’s, living in Clarke county, for whom I dug a well and for which he honourably paid me. I then went on to Strode’s station, where I spent all my money.”

At Strode Station, he met up with several old acquaintances. They purchased “goods in Cock and Lytle’s store to the amount of eighteen pounds.”

This is the first report I have seen of this store, presumably located at Strode Station, which was then a small community west of Winchester.

Afterwards, Shaw “jogged on with them to Clark court house [Winchester], and there commenced a roaring frolic, with a set of as jovial fellows as ever sat over a half pint of whiskey, amongst whom was a jolly Irishman, who cut as many didos as I could.”

At the conclusion of their frolic, “I exchanged all my goods for whiskey; then turned to jobbing about the town, and showing Mr. [John] Baker, the proprietor of the land, a number of places where water may be found. He kept me there a considerable time, endeavouring all in his power to acquire of me some knowledge of bletonism, after which he sent me off without either fee or reward.”

In concluding his book, Shaw recounted the price paid for acquiring some material success.

“In consequence of accumulating property [in Lexington] I have been equally if not more disabled in battleing with the rocks than the gallant [Lord] Nelson has been in battleing against the enemies of his country, as I have lost no less than one eye, four fingers, one thumb and seven toes.”

At the end of the book, Shaw listed the names of subscribers who purchased a copy of his narrative. There were 27 from Clark County; Hubbard Taylor was among them.

Shaw continued digging wells and advertised regularly in the Kentucky Gazette. The latter were described by a biographer as done “in the shape of the most execrable poetry, ‘written by himself.’”

Sadly, it was the Gazette that announced his end.

“John R. Shaw, well-digger and stone quarrier, of Lexington, died Monday evening, September 6, 1813, when blown up in a well he was digging for Robert Wilson. He was the author of the biography bearing his name.”

Earley: Resurrection disciples and the Bible