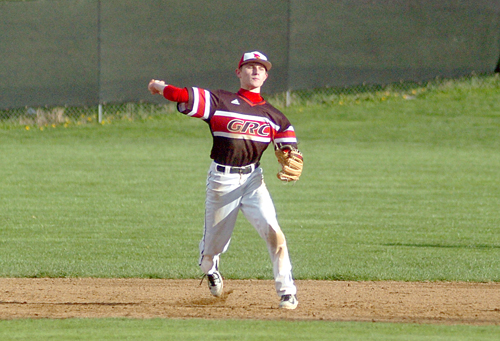 Ware struck out 13 Engineers and walked none to earn the shutout victory.

The Cardinals did not commit an error to support Ware’s shutout bid.

“The team played great defense behind me,” he said.

That’s something GRC has relied on early in the year.

“We’ve been good defensively all year,” GRC coach Matt Ginter said. “The kids are taking pride in their defense.”

The game was tight early, the Cardinals pushed across the first run in the third inning, added another in the fifth and scored a pair in the sixth.

“Anytime you can play a close ball game and put some pressure on the kids a little bit, that’s good experience to have down the road when we get in those kind of games.”

The Cardinals broke through a scoreless tie in the bottom of the third against Austin Dunn, who went the whole way on the hill for the Engineers. He finished with three strikeouts, four walks and three earned runs on seven hits.

GRC’s Cameron Dove reached on an error then advanced to third on Tyler Walton’s groundout. Ware brought him home on a line drive to center.

The Cardinals struck again when Dove singled with one out in the fifth inning. He moved to second on a balk by Dunn. Ware knocked him in again, to put the Cards up 2-0.

In the sixth inning, Connor Gray was hit by a pitch. Josh Bryan’s single put runners on the corners and JJ Johnson lined a single into center to score Will Henry, who was pinch-running for Gray.

“Jake had a good game,” Ginter said. “He did what we wanted him to. He threw strikes. He stayed ahead of the count. We had a better approach at the plate. Got some kids on and brought them around.”

Ware was 2-of-3 at the plate with a walk and a pair of runs knocked in. Dove also had two hits in three at-bats and a walk. He scored twice. He also stole a base.

The Cardinals are at home again tonight when they take on Bath County. First pitch is set for 5:30 p.m.

GRC track gearing up for Throwdown