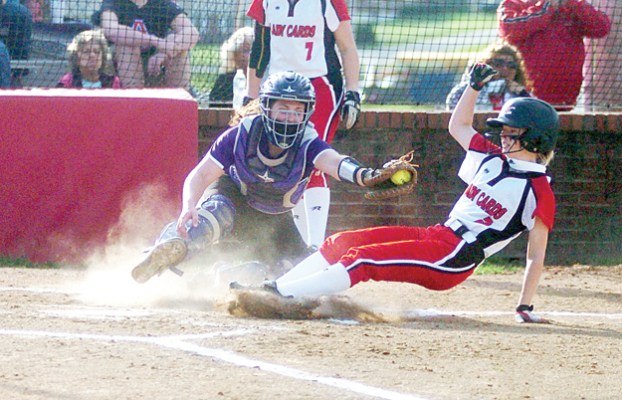 The George Rogers Clark High School softball team had a late lead against Campbell County, and after surrendering that, had a chance to be a walk-off winner.

But it wasn’t meant to be, as the Camels escaped Cardinal Heights Tuesday night with a 5-4 win.

“My opinon, they (Camels) are the best team in the region right now,” GRC coach Matt Puckett said. “They are sound one through nine and solid at every position. They have quality players. But we had a chance to win the game. We had a couple miscues, which I think coming to the end of the year, we’ll have those ironed out.”

At first, it looked like the Cardinals were impervious to trouble and mistakes, thanks to the work of pitcher Courtney Miles.

She went all seven innings in the cricle and struck out 13 Camels. She worked around trouble, stranding a runner on third in the top of the second after a lead-off triple. She also got out of a one-out jam in the fourth when Campbell had two runners in scoring position.

But GRC couldn’t dance between raindrops all night. The Cardinals gave up three runs in the sixth and two more in the top of the seventh. Only one of those five runs was earned as the Cardinals committed five errors in the game.

Making those mistakes will help his yoounger team grow through the season, Puckett said.

“It’s something you can talk about all day and you can try to explain to them, but you aren’t going to get the experience unless you go out and make the plays and take the reps day in and day out,” he said. “That’s something we’re just going to have to do to get better.

Despite the errors and Campbell’s rally, the Cardinals weren’t finished.

They rallied in the bottom of the seventh to load the bases. They had Miles — who already had a pair of hits — at the plate with two outs. She saw nine pitches before lancing one into the outfield that unfortunately was right at leftfielder Sarah Terhaar, who pulled it down.

“You get to the end of the game and instead of giving up, we had a chance to win it,” Puckett said. “Bases loaded and your No. 3 hitter up. Courtney hits a rope to left field and the girl makes the play. If it’s down, we win the game.”

The loss spoiled what was otherwise a masterful performance from Miles in the cicle. She allowed seven hits while striking out 13 — nearly half of which went down looking. She didn’t walk a batter and had a three-ball count just once.

“She was on,” Puckett said. “I know the outcome isn’t what we wanted, but I see it every day — we’re getting better.”

Clair Brandenburg had a pair of hits. Alyson Kidd had an inside-the-park home run in the first inning. Caitlyn Spencer had a hit and a stolen base. Christina Young had a single and a double and scored a run. Marly Rogers also had a hit.

The Caridinals fall to 3-6. They hit the road this weekend to take part in the Collins Spring Softball Bash.