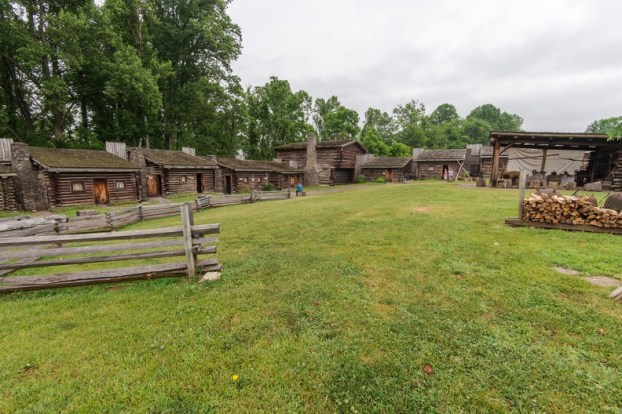 Memorabilia unveiling to kick off 2017 season at Fort Boonesborough

Fort Boonesborough State Park officially opens for the 2017 season today with plans to add a new exhibit and continue with annual programming.

Park manager Rob Minerich said the season kicks off with the grand opening of its Daniel Boone memorabilia collection. Ray Buckberry of Bowling Green donated more than 350 pieces of Boone collectibles he acquired over his lifetime to the Fort Boonesborough Foundation, Minerich said. The Foundation has loaned the collection to the state park.

According to a press release from the Foundation, Buckberry collected everything Daniel Boone including an assortment of items featuring Fess Parker and the TV series of the same name. Foundation members have cased, cataloged and set up the displays. One cabin on the fort will be dedicated to the display.

“Although the Foundation acknowledges not all the items are correct to the time period, it is still a wonderful look at the impact Daniel Boone had on the American public,” the press release said.

Buckberry and members of the Foundation will unveil the exhibit at 1:30 p.m. Saturday, April 15. Minerich said it will become a regular feature at the fort.

“The collection includes everything from lunch boxes, comic books, statues and knives,” Minerich said. “It’s a really extensive collection. Mr. Buckberry wanted to free up some space and ideally thought Fort Boonesborough would be the best place for this collection.”

Also this month the fort will host its annual Women of the Frontier program, April 22-23.

“This event is basically learning all about the life of women on the frontier,” Minerich said. “Their day-to-day chores that they did to survive the wilderness will be demonstrated hands-on. You can see them dyeing clothes, cooking, starting fires and shooting guns.”

Minerich said the fort will host other programs throughout its season, which lasts until Oct. 29.

— “A Gathering of Descendants,” June 17: The fort welcomes everyone with ancestors who came through the Fort Boonesborough area in the 18th century. Resources and information will be available about people who lived in the area during the time period and where to find genealogical information.

— Cool History on Hot Days, each Saturday in July and August: When the Kentucky heat and humidity make the outdoors too uncomfortable, visit the fort for special presentations, lectures and demonstrations in the air-conditioned comfort of the Tavern or Blockhouse.

— Rifle Frolic and Frontier Skills, Oct. 20-22: Open to all ladies and gentlemen to compete for prizes and honor. Includes a rifle shoot, woods walk, smoothebore match, Seneca run, hawk and knife, flint and steel and tavern games. Events ongoing throughout the weekend.

All events are free with paid admission to the fort, which is $8 for adults or $5 for children.

In addition to the special programming, the fort is open to the public from 9 a.m. to 5 p.m. Wednesday through Saturday.

“It’s like stepping back into the 18th century when the settlers built their fort here,” he said. “Visitors are shown a 20-minute orientation film that gives a history of Daniel Boone and then they take a self-guided tour of the fort replica.

“They go from cabin to cabin and see the evolution from what the first cabin to the latest one would have looked like, from dirt floors to wood floors and the different furniture and bedding, the trading post, the wood shop, a surveying cabin, candle making and soap making.”

Minerich said the fort has more than 20,000 visitors a year from all 50 states and abroad.

“It’s amazing how far the legend of Daniel Boone has spread,” he said. “I’m working on my fifth year here and people are truly fascinated by him. I think the Hollywood show here a lot with that.”

Minerich said of the programming can be attributed to Bill Farmer, the fort manager.

“He does a phenomenal job with the programming and ensuring everything is period-correct from spinning candles, cooking, weaving, hides and guns,” he said.

The fort also includes a museum of 18th century artifacts, including some found at the original fort site by the University of Kentucky Archaeology Department, he said.

The original site is nearly a mile from the replica on the Kentucky River, Minerich said.

Minerich said the fort is an asset to the area because of the rich history preserved and celebrated there.

“I think it’s obviously one of the most important pieces of Kentucky history,” he said. “Daniel Boone kind of blazed the way to the west by coming through the Cumberland Gap and settling at Fort Boonesborough. It’s very unique for the communities of Clark and Madison counties to have this park nestled between them that draws visitors from all over the place.”

Minerich said he also hopes Clark and Madison county residents will visit the park this year.

“If you haven’t visited, come out, and if you have, come out and see what we might have added since you were here last,” he said.

In addition to the fort, the campground is open year-round and the pool at will open Memorial Day weekend.

Fire investigators say the cause of an early morning fire in a Winchester apartment building appears to be accidental. Though... read more