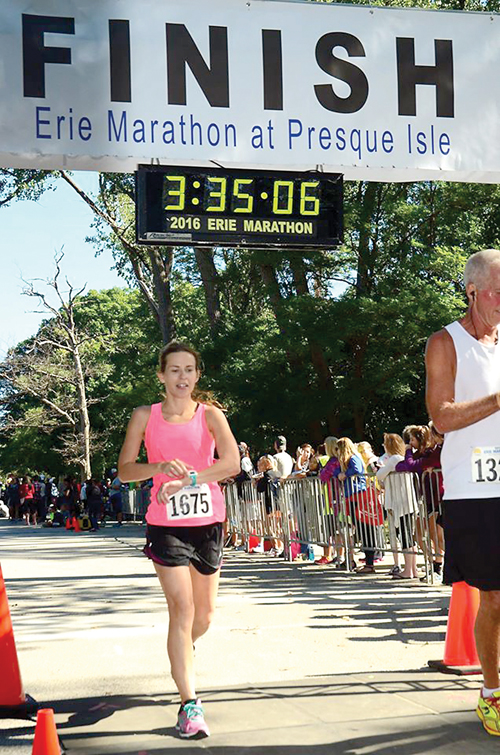 Christina Simmons never expected a couch-to-5K plan would lead her to the Boston Marathon — an event that draws nearly half a million spectators a year.

The Winchester resident ran her first mile in 2007 as part of that program. Her first marathon came three years later, and that’s when she decided she wanted to run in the Boston Marathon.

The event has been held annually since 1897 and is traditionally run on Patriots Day, the third Monday in April. Simmons will be in Boston alongside a little more than 30,000 other runners next week.

Her goal Monday is pretty simple.

“I just want to finish it,” she said.

That shouldn’t be too hard for the Owensboro native, who has finished more than 20 marathons over the past six years, including the one that qualified her for Monday’s race.

In September, Simmons ran in the Erie Marathon, needing at least a time of 3 hours and 40 minutes to qualify.

The qualification process for the Boston Marathon is somewhat complicated.

Runners who are able to finish a qualifying marathon with a time 15 minutes faster than the Boston Marathon’s qualifying time of 3:40 are the first runners allowed to apply. Those runners are given the first spots in Boston.

Then the runners with a finishing time 10 minutes quicker than the qualifying time get an opportunity to apply, and those five minutes below the time get their opportunity next. Finally, the remaining spots are given to the “squeakers” who are allowed to apply and possibly get chosen for the marathon.

Simmons knew she needed a five-minute buffer to be sure, since even if she came in under the time required, it was possible she may not qualify. The race is so popular, a spot is becoming more difficult to earn.

She trained all summer for the Boston Marathon, knowing she would need a good time just to get in.

Simmons said she never trained so hard, putting in speed work twice a week with long runs on the weekend.

“I don’t know anyone that is more committed and focused to their training plan than Christina,” Flynn said.

With a time of 3 hours 34 minutes and 36 seconds, Simmons set a personal record at the Erie Marathon. It was 13 minutes faster than her previous best, giving her the five-minute buffer she thought she had needed. She applied for the Boston Marathon and waited less than a week to get the good news.

“The Erie Marathon was on a Sunday and the application process opened the next day,” Simmons said. “That week after the Erie Marathon, I put my time in and was accepted.”

That quick turn-around relieved some stress, she said.

“Once you get that time, you’re not sure whether or not you will be good enough,” she said. “Some people go months wondering should they run another even faster or take a chance.”

Simmons has battled some injuries since the September race but is excited to get to Boston.

“I’m going with some friends, so it will be fun to just check the city out and take it all in,” she said.

National coverage of the race begins at 8:30 a.m. Monday morning on the NBC Sports Network. It will be replayed at 8 p.m. The race can also be seen at CBSboston.com or watchlive.baa.org.