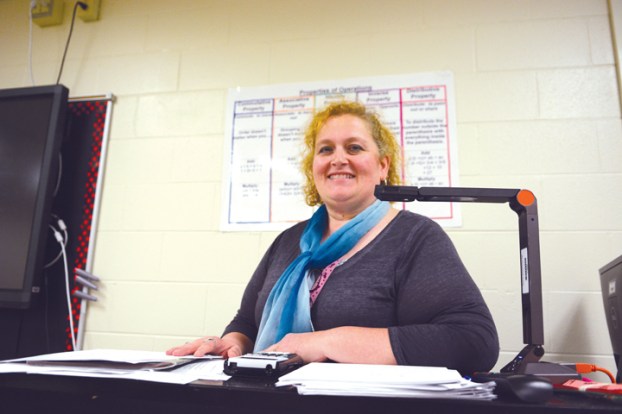 When Alisha Smith went to college at the unusually young age of 16, she said she wasn’t sure what she wanted to do with her life.

Fortunately for Robert D. Campbell Junior High, she fell in love with teaching.

Smith said her young graduation age was largely because of skipping the fourth grade.

“My family moved around a lot in this region,” she said. “In one school it seemed like I was learning the same thing in fourth grade as I had learned in third grade at another school.”

Her parents eventually settled in Winchester, and Smith graduated from George Rogers Clark High School, which was then located in the same building she teaches in today.

“I didn’t know what I wanted to do,” she said. “My counselor suggested that I take an education course and I said ‘OK’ and took just one.”

She said the one course was all it took to get her interested in the career, and described the suggestion as divine guidance.

Smith is the chair of the math department at Campbell. She has been at Campbell since it opened three years ago, and has been with Clark County Public Schools for 24 years.

She spends most of her time teaching advanced and traditional math courses to eighth graders, with much of the rest spent helping to plan ahead for the department’s growth.

Smith said she never saw herself teaching in middle school, and in college she wanted to only work with elementary students.

“I’ve taught one year of elementary,” Smith laughed. “I’ve never taught any more elementary and I absolutely love it.”

Smith said her teaching style can be stern, but she tells students up front she has high expectations. She said she doesn’t think she would be as successful as an elementary teacher.

She said Campbell���s math department has made great strides academically in the past year with some organizational changes.

For instance, she said the school invested in new software called Study Island to help students better understand the subject matter. The department also identified students who struggle more with math than their classmates, pairing them with a math teacher for another half hour each day.

Another change came through a lack of personnel one school year that led to some insight between the seventh- and eighth-grade math teachers.

“We had to have a seventh-grade teacher take an eighth-grade class, and while she was working with the students, she began to see what areas students were having trouble in,” Smith said. “This allowed her to go back to her seventh-grade class and help build those foundations in preparation for when they moved forward.”

Smith said the teacher now works with other seventh-grade instructors in the department to help identify focus areas during instruction.

She said the changes in the department have already shown to be successful, with test scores showing gradual improvement among Campbell’s students.

“The kids are working really well with that,” she said. “We’re hoping for more improvement.”

Smith said her favorite part of teaching is watching her students learn.

“I like seeing kids learn and grown, and for them to get excited because they are achieving things,” she said.

She said she has a knack for bonding with “odd” students, and loves seeing the individuality of people in her class.

Smith said when she isn’t teaching, she enjoys brain teasers like sudoku and crossword puzzles. She also enjoys crocheting.