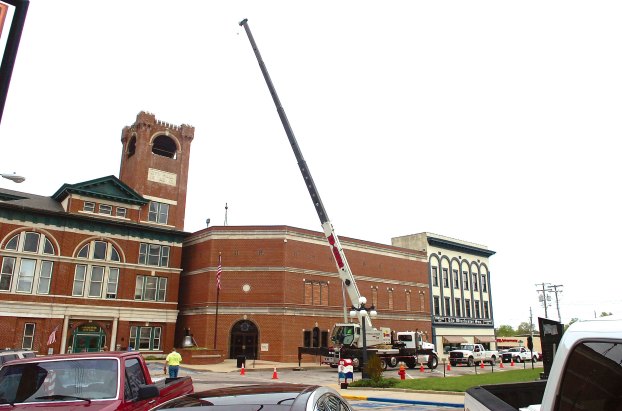 Contractors blocked off a portion of Wall Street Tuesday morning to make room for a large crane used to move a new boiler into the Clark County Detention Center.

The Clark County Fiscal Court approved financing for the project in March, which includes a seven-year lease for $204,000. The county had to pay 30 percent, more than $61,000, immediately to start the project. The payment was made from the county’s “rainy day fund” for unexpected projects or purchases. The court voted to finance the remaining balance of $142,660 for seven years through the Kentucky Association of Counties.

In February, state officials gave Clark County 45 days to replace the boiler at the detention center after it failed, leaving the facility without hot water temporarily.  The 26-year-old boiler, which had been patched previously, is the original boiler for the jail, Clark County Judge-Executive Henry Branham said at a fiscal court meeting in February.

Kiwanis gearing up for auction

For at least 31 years, the Winchester Kiwanis Club has filled the airwaves to auction items of all price ranges.... read more