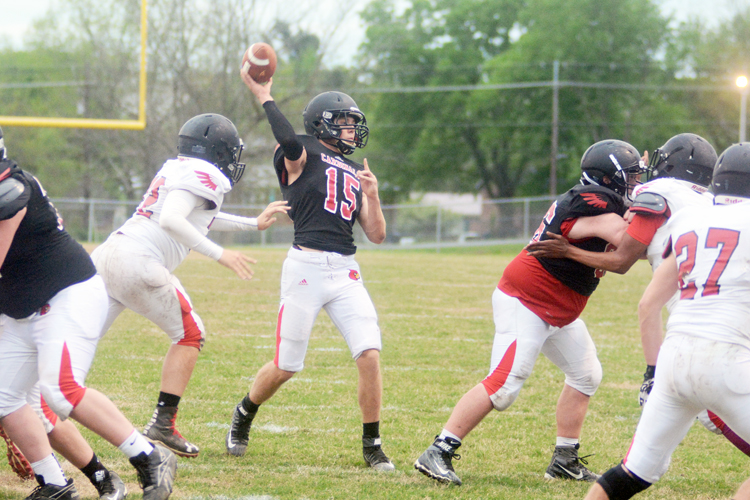 Split into two teams, those wearing black jerseys and those wearing white, the Cardinals took part in a spring game scrimmage Monday night at Cardinal Stadium.

“I appreciate that the community came out and supported us for this,” GRC coach Oliver Lucas said.

The Black team came away with a 13-7 victory. The White team had led most of the game, getting a touchdown pass from Pearce Nisbet to Isaiah Nolan on the opening drive.

In the fourth quarter, Farris Shakadih caught an Isaac Graham pass for a score and Jack Keaton — who was on place-kicking duties for both squads — tied the game with an extra point.

The Black team went ahead with a minute remaining after  Tavian Daugherty recovered a fumble in the end zone.

“The kids played hard. It was well played and well coached,” Lucas said. “The game went down like it should have. I don’t think it should have been a blowout. Our defense rose to the occasion and there were some great things that went on offensively.”

As expected with new players learning new positions, there were a number of penalties, but largely the defense for both squads looked strong.

Nolan made an acrobatic, circus catch in the second half on a pass from Nisbet thrown only where Nolan could get to it.

Sakadih had a handful of deep catches.

Those in attendance were able to see a lot of different players make plays as everyone had their number called.

“It’s important to play everyone,” Lucas said. “God didn’t create junk. We always find a way to play all of our kids. If they come out and stay with the program, they will have a chance to have success.”

GRC didn’t just split its players. The coaches — bolstered by the addition of Campbell Junior High’s coaching staff — were split during the scrimmage.

“The coaching staff did an outstanding job, I can’t say enough about their work,” Lucas said.

Now the Cardinals start the long journey through the summer as they prepare for the fall.

“We’ll look at the film and start putting together all the pieces,” Lucas said. “We’ll see who are the starters so we can start working on some continuity.”