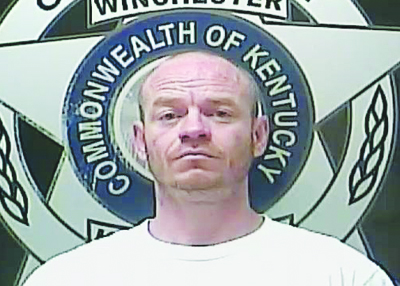 One person is in jail for allegedly beating a Clark County man with a hammer before taking his medication and a firearm last week.

Tim Reed II, 39 of Clay City, was arrested Monday afternoon for second-degree assault and first-degree robbery for the April 18 incident.

Clark County Sheriff Berl Perdue Jr. said warrants have been obtained for a man and woman who were also present when the incident occurred.

According to court documents, deputies were called to the victim’s residence near Trapp Goff’s Corner Road around 4 a.m. April 18, he said. The victim, who was not identified in the arrest warrant, knew Reed and let the other people into his home, Perdue said. The group then assaulted the victim with fists and a hammer, before leaving with his medication and a firearm.

The victim was treated and released from Clark Regional Medical Center with multiple lacerations to his face.

“He was beaten up pretty badly with a hammer,” Perdue said.

According to the Clark County Detention Center, Reed is being held on a $50,000 cash bond. He will likely be arraigned today in Clark District Court.

If convicted, Reed could receive up to 20 years for robbery and 10 years for assault.