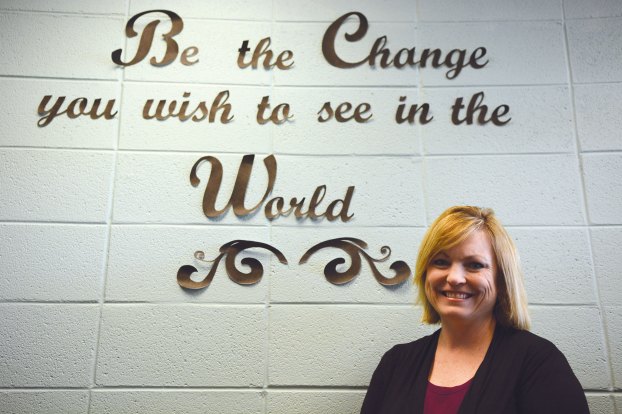 Baker Intermediate counselor Cindy Whiteside says she was driven to work in education because of two things: her love of learning and her desire to help others.

Whiteside, a Clark County native, spent 13 years as a teacher, predominantly working in her hometown teaching reading and science.

“I love nature and the environment and animals,” she said. “What better place to expose students to that than a science classroom doing experiments, having animals in the classroom or field trips and nature walks. I loved doing that.”

She said as a teacher she loved making students more aware of their environment and encouraging them to take better care of the world. She said that some days when the weather was nice she would have her students collect their books and have class outside just to observe the environment.

Six years ago, Whiteside stayed in the school system but transitioned to being a counselor.

“I feel like listening to people has always been a skill that I’ve had, and I enjoy listening to others and helping them solve problems,” she said. “With the age that I teach — middle school — you’re seeing those kids at a transitional time period where they’re starting to become their own person and their personalities are really developing a lot.”

She said that after seeing students making big life decisions about the people they wanted to become, she felt it was important to be in a position to help them recognize their strengths and draw upon them. Counseling gave her that opportunity.

“I’m still very much a teacher at heart,” Whiteside said. “I still teach in different ways every day.”

Whiteside said that as a counselor a big part of her job is teaching students to problem solve and set goals for themselves.

“As a counselor you get to look a little closer and see the barriers that might be getting in the way of them actually accomplishing those goals,” Whiteside said. “As a counselor we really try to be an advocate for the student and help them reduce those barriers.”

The job is not without its challenges though. Whiteside said it’s difficult to help meet the needs of all of the students at the school sometimes, especially when they are dealing with problems outside of the classroom.

“Some of it is out of our control, and we have to teach them to cope with some of the situations that they’re in,” she said. “We have to instill in them a resilience to bounce back from the problems that they face.”

She said that modern society has put some students in the position of making difficult decisions at an early age, and for school staff who interact with them every day, watching the struggle can be emotional.

“It can be emotionally draining at times to walk through the day with them and struggle through those problems with them, but it’s worth it in the end when you see them start to rise above it, and become better at some of the things that were holding them back,” she said.

As a professional who spends every day talking to students about what barriers they face, Whiteside said she has two pieces of advice for parents and guardians of students.

First, she says it’s important to remain present and engaged with children when spending time with them, even if that time is limited.

“I hear some students tell me about being with their family, but they don’t feel that they are being noticed and engaged,” she said.

Whiteside said for many families circumstances make that difficult, with parents working multiple jobs or custody of a child being split between two households. However, she said that sometimes other distractions can preoccupy parents and guardians, like social media.

“(Children) have a lot to say,” she said. “They just want to be heard like anyone else.”

The other piece of advice is for parents and guardians to work on character building at home.

“We have really tried to build our character education here at Baker,” she said. “It really helps that along if it is reinforced at home by teaching their children to respect themselves and others.  So many other important character traits will follow if basic respect is instilled at an early age and reinforced along the way.”

Whiteside said that when she isn’t teaching she enjoys being outside playing with her three children and working in her garden or flower beds.