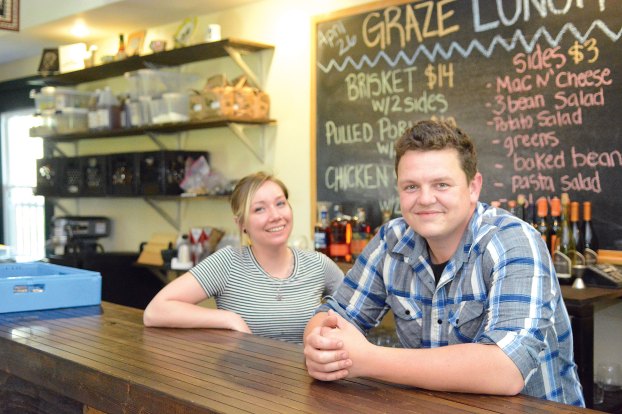 Up and running: Graze Market and Cafe reopens after renovations

After being closing for renovations for five months, Graze Market and Cafe, 150 Combs Ferry Road, has reopened to the public with a new look and a new menu.

Owner Craig de Villiers said during the time Graze was closed he replaced the old counter in the building, which once served as a post office and later as a general store, with a hand-made bar of his own design. He also made several other fixtures in the restaurant.

But the aesthetics of the cafe are not all that’s changed. de Villiers said he installed a large smoker on the property, and has been smoking pulled pork, brisket and more since he’s reopened.

“We’d like to eventually get to smoking a whole animal to serve over the weekend,” de Villiers said. “A whole lamb or pig, something like that.”

However, he added that old favorites from the cafe, like steaks, chicken and seafood, will still be available from time to time. They can also be found at the restaurant’s second location at 207 South Limestone Drive in Lexington.

The renovations offered de Villiers a chance to reinvent Graze, he said, and the outcome is something he’s excited about.

“It’s finally becoming what I’ve wanted it to be,” he said.

He said that cooking has always been his passion, ever since he was a young man growing up in South Africa.

“My father was a professional hunter,” de Villiers said. “People would come to buy from him and while they were with us we’d cook them meals.”

The cooking he did at home prepared him for the work of running a restaurant in his adult life.

He said that he wants the atmosphere of Graze to remain casual, as it has been for the past three and a half years.

During the renovations de Villiers also expanded the restaurant’s beer and bourbon offerings, and he said that while the kitchen may close at 9 p.m., customers can enjoy their drinks longer if they wish.

In addition to the cozy rustic interior dining room, de Villiers said Graze offers an open patio area when the weather is nice. However, if the weather is bad, he asks that customers call before making the drive out, as seating may become limited.

Clark County’s proposed 2017-18 budget took another round of cuts and changes Wednesday in its last review before a first... read more