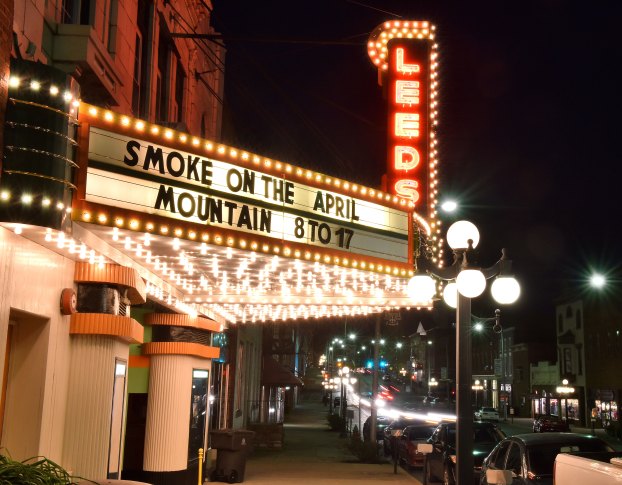 Leeds Center for the Arts held its grand reopening April 15, and a grand evening it was.

A full house was on hand to hear cellist Ben Sollee, who thrilled the audience with a two-hour concert. The weekend began Friday morning with a yoga class at the theatre. Erin Smith led a class of more than 50 participants, who filled the stage and spilled out into the aisles, while Sollee accompanied the class with his heavenly cello. He took part in several other events at the theatre before the concert.

Not taking anything away from Ben Sollee, the real star that weekend was the theatre itself. Simply put, the place is a knockout. I wish I could adequately describe all the work done on the building. Every surface, inside and out, seemed fresh and new in the near-century old movie house. Tracey Miller, her group of volunteers and the Winchester Council for the Arts deserve a huge thank you for this gift to the community.

The story of Leeds Theatre began with its predecessor, the Liberty Theatre on North Main Street. At 7 p.m. on May 8, 1925, a fire started in the projection booth at the Liberty during a screening of the silent film “Proud Flesh.” According to an article in The Winchester Sun, the operator, Albert Conn, was rewinding a reel when the celluloid somehow caught fire. He was briefly trapped by the flames and had to fight his way out with a fire extinguisher. The fire department arrived on the scene and put the blaze out in short order. The projection machines were destroyed along with 18 of the 20 films on hand.

Theatre manager Morris B. Levy stated in an interview that the fire was a rare occurrence that “would never happen in the new theatre being erected across the street, as the very latest of fire-proof apparatus was being installed in the steel-concrete booth.” He added that future shows would be cancelled and “the new picture theatre would be rushed to completion.”

A Sun headline on Tuesday, May 12, 1925 read “Liberty To Be Opened Tonight.” The new theatre was “informally thrown open to the public” due to the fire that closed the old theatre. Seats from the old theatre were temporarily installed. Winchester Amusement Company took out a large ad to announce the showing of Paramount Picture’s “The Crowded Hour” starring Bebe Daniels at “7 O’Clock Sharp.”

The theatre began daily performances from 2 to 5:30 p.m. and 7 to 10:30 p.m. Admission was 25 cents for adults, 10 cents for children and there was a “balcony for colored patrons.” For the next two months, the movie house would be referred to as “Winchester’s New Theatre Beautiful.”

The company announced a naming contest for the new theatre. They asked for an original and distinctive name of one word not exceeding ten letters. Judges were Mayor G. E. Tomlinson, C. B. George (of St. George Hotel) and M.T. McEldowney. First prize was $25; second and third prizes were free passes for six and three months, respectively.

The grand opening on July 8 featured the 1925 hit film “The Little French Girl” and was preceded by several pages of advertisements in the Sun. “Better, grander and more palatial than ever before seen in Winchester [and] which will operate on a scale seen only in cities of much larger population.”

After entering the theatre by “the beautiful French doors,” patrons would enter “a most spacious lobby, the walls of which are made in marble.” In the foyer, “to the left and right are mirrors surrounded by handsome mahogany woodwork, while underfoot one treads upon noiseless tile floorings and overhead the soft subdued lights attract the attention, and immediately the noise of the city street is forgotten.” Advancing further into “the playhouse, earthly cares are entirely forgotten and one is enveloped in the midst of the best in amusement and entertainment that can be offered.”

The manager Morris B. Levy had directed operations at the old Liberty Theatre for more than three years, and J. A. Conn Jr. reprised his role as projection engineer. The company furnished the theatre with the latest equipment: “Powers G-B Improved models of motion picture machines, a Brenkert Spot-Light Machine, and a two-arc 75-ampere General Electric Generator to produce direct current for the machines.” The screen made by Minusca eliminated the glare that was common in other theatres.

The president of Winchester Amusement Company was S. D. Lee, said to be “a leader in business and social circles” and a “typical Southern gentleman.” Slaughter B. Sparks, the secretary-treasurer, brought years of theatre experience and had been superintendent of the Phoenix Amusement Company of Lexington.

The name chosen, Leeds Theatre, was a play on the president’s name. I have not yet identified the contest winner.

Thanks to the Winchester Council for the Arts, this magnificent restored facility is truly “Winchester’s New Theatre Beautiful.”