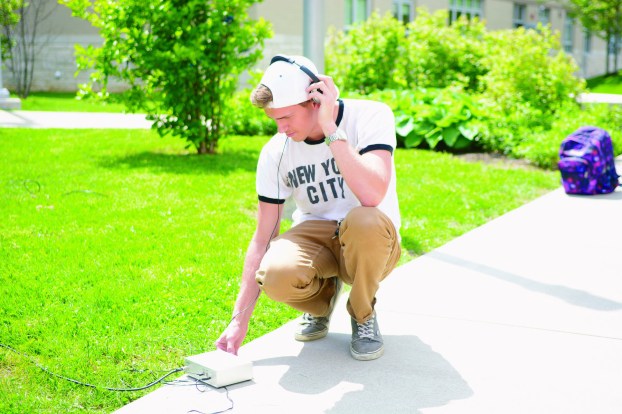 Daniel Helgeson uses the radio telescope to listen to a storm occuring on the sun Friday afternoon. (Photo by Seth Littrell)

Students at George Rogers Clark High School have finished work on a device that will allow them to listen to storms happening on the planet Jupiter and its moon Io.

The students, taking part in Daniel Burton’s astronomy class, have been working since January on a project to design and build a radio telescope that will be mounted on the roof of the high school.

“It basically acts as a large radio antenna,” Burton said. “Except instead of picking up radio frequencies on earth, we’re listening for sounds from Jupiter.”

The telescope consists of four PVC antennae connected with coaxial cable. Another cable connects the antennae to a radio built by student Jacob Little, allowing listeners to hear whatever is happening where the telescope is pointed.

The design phase of the project about three weeks, according to GRC student Katelyn Byrd. Once designed, the telescope took two weeks to build, she said.

Burton said that much of the material for the radio telescope was donated by Lowe’s Home Improvement.

While most of what the radio picks up is empty static, using a knob on the radio after the telescope as been oriented to check frequencies will eventually allow the user to pick up noise, like whirring or screeching sounds. Burton said the interference is representative of storms happening in the planet’s atmosphere.

The class tested the telescope Friday by pointing it at the sun in the afternoon to hear solar storms.

Byrd, who led the design and construction of the antennae portion of the project, said that GRC has partnered with Morehead State University, which has a similar radio telescope.

“We can partner together to see a lot more when we’re looking together,” Byrd said.

Byrd, a junior, said she looks forward to using the telescope again during her senior year. She said that GRC and Morehead will be able to time when they listen based on when storms on Jupiter are projected to occur, giving the schools a chance to learn more about the gas giant along the way.

GRC selling flowers in May

George Rogers Clark students are selling flowers grown in the school’s greenhouse for the remainder of the school year. The... read more