Right now, 60 acres of land between Interstate 64 and U.S. 60 contains a lot of grass and a few test pilings.

By the end of the year, the rolling hills should be converted into a solar farm to generate electricity for customers of East Kentucky Power Cooperative. 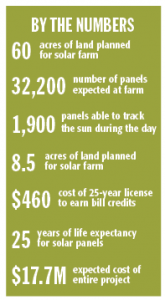 Last summer, the company announced a $17.7 million project to build the facility on land near its headquarters outside Winchester. On Tuesday, officials will break ground for the project on the property along Lexington Road.

EKPC External Communications Manager Nick Comer said customers have been asking for renewable energy options, including solar, for a while. This is EKPC’s first attempt with solar energy.

“We’re learning as we go,” Comer said. “This is something new with East Kentucky Power.

Project manager Matt Clark said most of the 32,000 solar panels will be mounted in a fixed location in the field. Of those, 1,900 will motorized and able to track the sun as it moves across the sky during the course of the day. The difference in energy collection between fixed and tracking panels remains to be seen.

“We’ll measure the efficiency vs. the cost difference,” Clark said.

“It’s a little drop in the bucket,” he said. It is a drop both residential and commercial customers have asked for from their electricity providers, including Clark Energy, he said.

Solar technology has been around for decades, but the technology has recently become more affordable and more efficient, Comer said. Still, it’s not a complete replacement for coal or natural gas to fuel power plants.

“Even in optimal conditions you’ll get eight to 10 hours of sunlight” a day,” he said. “In winter, they produce about half the energy they would in peak conditions.”

Over time, the panels will lose efficiency as well.

The length of the license coincides with the life expectancy of the panels, Clark said.

“We have a warranty from the manufacturer for (25 years),” he said. “After 25 years, the (degeneration) is more rapid. Twenty-five is the optimum for high efficiency.”

While EKPC has no current plans for more solar facilities, Comer wouldn’t rule out the possibilty for the future.