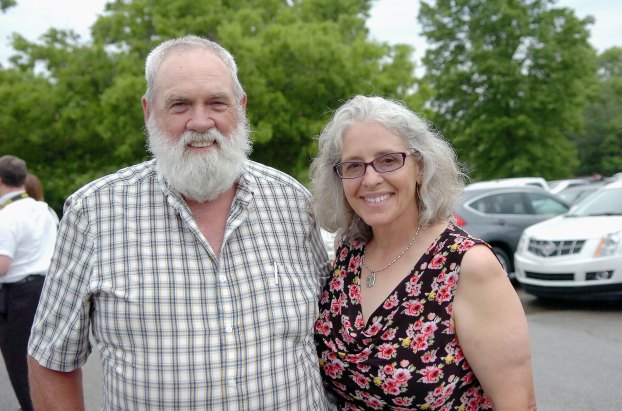 That love and interest was a factor in her joining the Winchester-Clark County Historic Preservation Commission about six years ago. Barnes said she was asked to fill an unexpired term of Ramsey Flynn, then agreed to serve three years as chair of the commission.

While she was growing up in Estill County, Barnes said there was a very active historical society, but nothing to compare to Holly Rood or Winchester’s other old homes.

“It is a beast,” Barnes said. “It is a huge house and it’s such a treasure. Holly Rood and houses like that are a true treasure and Clark County is full of them.”

Barnes moved to Clark County in 1975 when her husband became a lineman for East Kentucky Power Cooperative. At the time, linemen were required to live within a certain distance of the station, she said. In a way, Clark County was already familiar.

“My mother actually grew up in the Becknerville area, so it was like coming home in a way,” she said.

Around 2011, Barnes said she was already helping clean and sort files at the Clark County Courthouse when she was invited to join the board and fill the rest of Flynn’s term, she said.

“It took me about six months to sit and learn,” she said.

From there, she learned where things should go.

While the Commission oversees both Holly Rood and the Lower Howard’s Creek Nature Preserve, Barnes’ attention has been focused on the home of James Clark, Kentucky’s 12th governor.

The house itself is more than 200 years old. It was completed in 1814 and built specifically for Clark and his wife, who named it for her father. The federal-style home was placed on the National Register of Historic Places in 1974, and continues to host receptions, teas and other events. There have been theme events where actors portrayed those who lived in the home through the years, among others.

Those events help fund restoration and preservation efforts for the mansion, she said, starting with the governor’s bedroom.

A group of board members also recently painted the 14-foot tall rooms in the home. Barnes was there herself at 7 a.m. Sunday preparing flowers fora reception later in the day.

Keeping the place up is a job in itself for the board. Aside from age-related repairs, there are those needed from how the house is used through the year.

“It’s a hard job to take care of Holly Rood,” she said.

Barnes had the time to devote to Holly Rood, as she had retired from business in Lexington, and other board members were still in the workforce.

Barnes recently stepped down after three years as chair of the commission, but remains active as treasurer and helping at the house.

“I thought it’s time for someone else to be chair,” she said. “A fresh perspective is always good.”