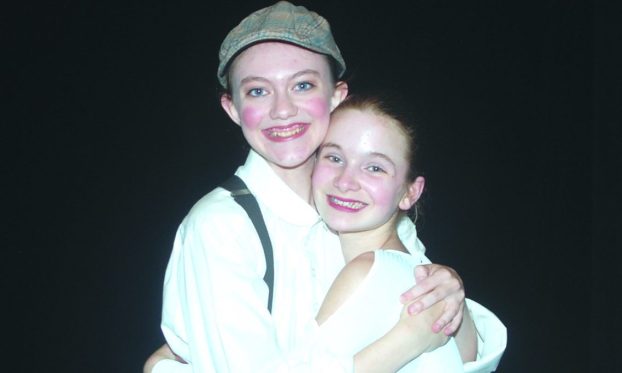 MEgan Kurtz, left , and Ginny Osbourn play the lead roles of Punchinello and Lucia, respectively, in Winchester Christian Ballet's "You Are Special." The ballet will be at 3:30 p.m. Saturday and Sunday at Leeds Center for the Arts. (Photo by Fred Petke)

There are a couple new events this weekend, including one returning to the Leeds Center for the Arts after a decade.

Winchester Christian Ballet will debut its new summer show, “You Are Special,”  at 3:30 p.m. Saturday and Sunday at the Leeds Theater on Main Street.

“We’re thrilled to be in the newly-renovated Leeds,” WCB director Mary Bolar said.

This year’s show is a new production based on a book by Christian author Max Lucado.

“I started working on this back in the fall,” choreographer Davina Garrett said. “The inspiration and idea really came from the Lord.

“We like to have Christian themes as well as classical ballet,” Bolar said.

The performance includes about 60 dancers from age 3 to high school seniors, Bolar said. Admission is free but donations will be accepted.

Earlier Saturday, there will be a car show on the Bluegrass Community and Technical College campus on Rolling Hills Lane to raise funds for a playground update at the Bluegrass Children’s Academy, a child care center on campus.

“We have several employees who are members of car clubs in town,” she said. “They decided to put it on.”

Registration begins at 8 a.m. and costs $15 per car. The first 50 cars registered will receive a dash plaque. There will also be trophies for best import vehicle, best truck, best domestic, best pre-1980 and best in show, she said.

Throughout the day, there will be a DJ, food, a kid zone including a bounce house, and a raffle with at least 50 items available, she said.

Participants should park in the lot at BCTC. Additional parking will be available at Amazon, she said.

Man gets 15 years for three assaults