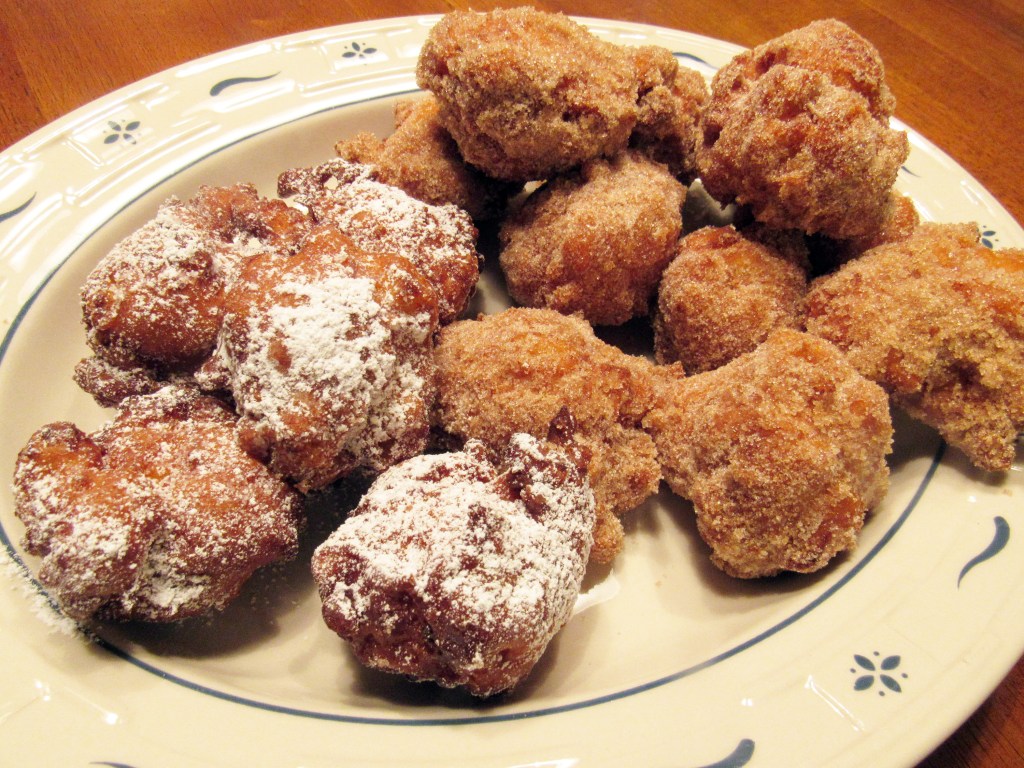 A few weeks ago I was reminiscing about my junior high school home economics teacher, Mrs. Culton, which brought back memories of an apple fritter recipe she shared with us.

I wrote that recipe down years ago and hadn’t really thought about it much until I was remembering Mrs. Culton. 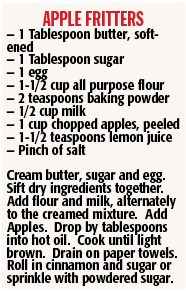 At that point, I decided I needed to search for the recipe and try my hand at making them.

Before I was able to locate the recipe, Susan Rogers left word with a co-worker to let me know she had that recipe and she was willing to share it with me; all I had to do was call her.

When I spoke to Susan, she shared a few memories she had of Mrs. Culton — they had worked together. Susan talked about how much she has enjoyed the apple fritters over the years and said the recipe could be doubled, tripled, quadrupled or whatever you wanted to do — no matter what the multiplication factor they would turn out great.

Within a few days, I decided I needed to take the plunge and try making these yummy fritters.

After I got the batter ready, I peeled and chopped a granny smith apple — it was just enough for one cup. I chopped the apples pretty small, thinking the fritters wouldn’t be that big and I didn’t want huge chunks of apple in small fritters.

After adding the apples to the batter, I started heating the oil in a heavy-duty pan on the stove. Since there was no mention of how much oil I needed to use, I just figured the batter needed to float so I just put enough in the pan for that to happen.

I knew I needed to wait until the oil was hot before dropping the batter in to fry, so I patiently waited. To test the oil, I dropped a drop of water into the oil, knowing if it sizzled and splattered, the oil was hot enough.

After several drops of water, the oil was ready.

I started out dropping batter by the tablespoon, but after three or four of them, I decided I would use a teaspoon because I wanted to make sure the dough got done. Now, when I talk about tablespoon and teaspoon here, I’m not talking about measuring spoons — I’m talking about the spoons you use at the table when you are eating.

I didn’t want to crowd the pot, so I only fried about four or five fritters at a time.

After the fritters were brown enough for my liking, I turned them over to brown on the other side.

While the first batch was frying, I mixed some cinnamon and sugar and had it ready to dip the fritters in. As I removed each fritter from the cooking oil with tongs, instead of letting them drain on paper towels I immediately dropped them in the cinnamon and sugar mixture and coated each one.

Then I placed them on a cooling rack. Susan’s version of the recipe said you could also sprinkle with powdered sugar. We didn’t do that in Mrs. Culton’s class, but I decided I would try a few that way too.

After the first batch was on the cooling rack, I yelled for Brad to come break one open to see if it was done. I was too busy watching the second batch and I didn’t want to take my eye off of them long enough to check the first ones for doneness.

Brad cut one open, took a bite, and said “Yum, yes they are done.” So I continued on with deep frying the fritters.

When I’d used up all of the fritter batter I finally decided to take a taste. Boy, oh boy, were they good — just like I’d remembered and they looked just like I remembered, too!

The next time I make these, and yes, there will be a next time, I won’t worry about chopping the apple real small, bigger chunks will be just fine; and I might even add a little more apple than called for.

I nailed this recipe and it will definitely become a part of my self-made cookbook.

This recipe made about 20 fritters. I did send some to work with Brad to share with my taste-testing crew and they got a thumbs up from everyone.

Yes, they were as good cold as they were right off the stove.

I want to thank Susan Rogers for providing the recipe and making one of my childhood memories come alive.

Just so you know, after making the fritters I was searching through a really old stack of recipes I have, and came across the apple fritter recipe card written in my junior high handwriting. Along with it was another recipe Mrs. Culton gave us called french breakfast puffs. That’s on my list of things to bake one day soon.

Are you sleeping on what life has to offer?