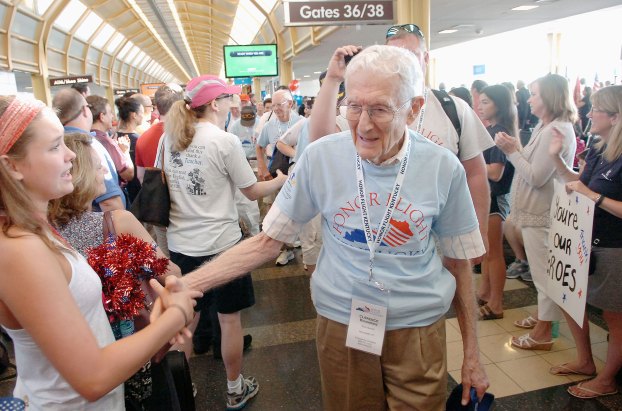 A veteran is greeted during the “Welcome Home” celebration at Bluegrass Airport following a previous Honor Flight. (Sun file photo)

Seventy veterans, their guardians and a university president are flying to Washington. D.C. today In the latest trip from Honor Flight Kentucky.

For the veterans of World War II, Korea and Vietnam, it’s a one-day, all-expenses-paid trip to the capital to tour the war and military memorials and to lay a wreath at the Tomb of the Unknown Soldier.

According to Honor Flight Kentucky, Saturday’s trip will be sponsored by the University of Kentucky, and UK President Eli Capilouto will make the trip with the veterans and their guardians. More than half of the veterans on this flight are from the Vietnam era, with six from World War II and 22 from Korea. Three of those are female veterans.

Each has their own story from their service. These are the experiences of the six Clark County veterans making the flight.

Hill joined the U.S. Army in 1968 and was put in the infantry, training at Fort Knox and Fort Polk before being shipped to Vietnam. After spending time at Cam Rahn Bay and Da Nang, he was assigned to a Marine post near the demilitarized zone before returning to Da Nang.

By then, his permanent assignment came through.

“They pulled me out of the infantry to ammunition storage,” Hill said, processing shipments and issuing ammunition to units throughout the area. When the time came to re-enlist, he decided against it.

“I thought about it and said I’d like to go back to the world,” he said. After finishing with seven months at Fort Hood Texas, Hill came back to Clark County. After working at the VA and Bundy Tubing, Hill said he went back to school and learned machine repair, graduating from what was Central Kentucky Technical School. For the next 34 years, he repairing equipment for a Lexington company before retiring.

“(I’m) just looking forward to talking with different guys who had some of the same experiences I had,” he said. “Some from my church are going. Just the overall trip and conversing with the guys.”

Sipes was drafted into the U.S. Army in 1952 and stayed for about 18 months, working with “big guns” and in the motorpool in Germany.

“It was more like having a job,” he said. “You knew every day what you’d do.”

Leaving his native Clark County was tough, he said.

“I hated to leave here but I’m proud I was drafted and served two years for my country,” he said.

After his hitch ended, he returned home and worked with his father’s masonry business. When his father retired. Sipes started his own company. After living in Lexington for 45 years, he recently moved back to Clark County.

This trip will be Sipes’ first to D.C.

Shaw was drafted into the Army in 1955 and spent the next 24 years in the service, mostly working with helicopters.

He was sent to the Signal Corps and was shipped to Turkey, before returning to Fort Riley, Kansas in the early 1960s. Once there, his career took a major turn.

“I saw people come into the exchange in flight suits and I started talking to them,” he siad. After graduating from flight school, he became a helicopter pilot and was sent to the 1st Cavalry in Vietnam for his first tour.

“I was shot down and fractured a jaw, but no big problem,” he said.

When he returned for a second tour in 1969, his Chinook was shot down and he spent the next six months recovering from his injuries, which included losing his left knee, he said.

With his flying days over, Shaw became a non-rated maintenance officer and was eventually discharged. As a civilian, he worked at Blue Grass Army Depot and became an oil analysis specialist and inspected oil labs around the world.

“I really want to make the trip,” Shaw said of the Honor Flight. “I haven’t been to the (Vietnam memorial)… It may not be in my best interest. I want to see it and see the names.”

Henry joined the U.S. Navy in 1951. After completing boot camp in San Diego, he became a third-class machinists mate on the USS The Sullivans, a destroyer named for five brothers killed when the USS Juneau was sunk in Guadalcanal in 1942. Henry worked in the steam-powered ship’s engine rooms.

Henry was promoted to second-class before he was discharged in 1955.

Henry moved to Clark County in 1966 to become the U.S. Department of Agriculture’s district conservationist, a job from which he retired.

“My son is going as a guardian with me,” he said. “We’ll probably see the Iwo Jima memorial and the Korea memorial. I’ve seen them before but it’s been a long time.”

Hayes joined the U.S. Marine Corps in 1961, supervising about 20 people while in charge of fire directional control for an artillery battery.

Hayes went through boot camp in San Diego and infantry training at Camp Pendleton in California. In January 1964, he was sent to Okinawa, Hong Kong, the Philippines and Korea, as well as a couple trips around Vietnam.

After his discharge in 1965, Hayes spent his career working for airlines as well as being a flower broker. Originally from Ohio, Hayes and his wife moved to Winchester in 2006.

Hayes said he will be wearing his father’s U.S. flag lapel pin on the trip. His father, who served in World War II, wore the pin every day, Hayes said, and he plans to leave it on the World War II Memorial.

“I’m very humbled to go on a trip with people 80 or 90 years old,” he said. “I’m the least worthy of someone going on the trip. Just to be in the company of these patriots, these veterans who did so much for their country and to be quietly respectful of them.”

Gay was in the U.S. Army during the Vietnam era and worked in supplies, according to his application. Gay could not be reached before press time.

Two people charged with not seeking medical attention for an infant after the child fell off a bed pleaded not... read more