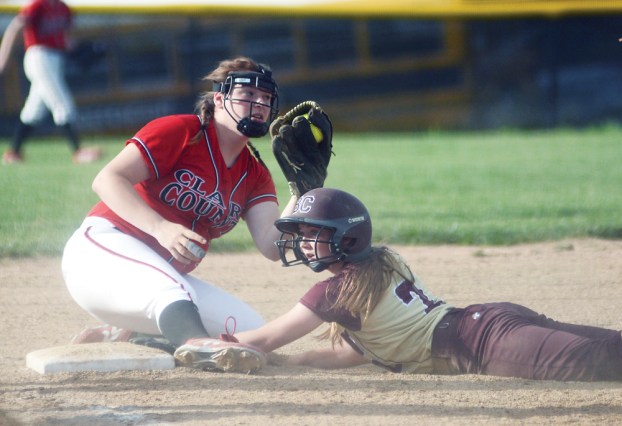 If the first game of the 40th District Tournament is any indication, Cardinal Heights will see plenty of good softball over the next two weeks.

The George Rogers Clark High School softball team fell short in its upset bid in the opening round against top-seeded Bourbon County.

Despite a gutsy performance, the Cardinals fell, 6-5.

“I couldn’t ask for anything more,” GRC coach Matt Puckett said. “They believed and they played hard. We just came up short.”

GRC never led, but the Colonels — who won both regular season meetings easily — never pulled away. Each time the Colonels scored, the Cardinals chipped away.

A solo home run by Leah Hayes in the sixth inning proved to be the difference. It gave Bourbon a two-run edge going into the seventh and GRC rallied to score one, but couldn’t get the equalizer.

“They’re a good team,” Puckett said. “They hit the ball very well. We hit the ball tonight, they just came out on top. A hit here or a hit there, a play here or there, and maybe things turn out different.

“Now they (Colonels) have a shot to win the region. I couldn’t be any more proud of our girls.”

GRC’s season ends at 9-16. The Cardinals won’t have the chance to defend the 10th Region crown.

It was expected to be a rebuilding year for the young Cardinals, who also dealt with some injuries through the season.

Some of the youth develop quickly for GRC — notably seventh-grade catcher Marly Rogers, who started most of the year and worked her way into the middle of the Cardinal lineup.

In the second game, Montgomery County defeated Paris, 10-5. The Indians and Colonels square off in tonight’s championship game in Winchester. First pitch is set for 6 p.m.

Both teams qualified for the region tournament.