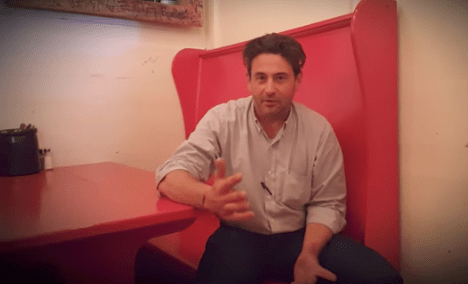 Steve Atkins, owner of the Engine House Deli + Pub, released a video over the weekend describing some of the challenges at the local restaurant. He said he will close after the Beer Cheese June 10 in order to make time for needed renovations and upgrades. He is also asking the community to support the project through donations to a GoFundMe page.

A local chef and businessman is asking the community to invest in improvements to a restaurant that has been a fixture in Winchester for more than three decades.

Steve Atkins, owner of Engine House Deli + Pub, released a short video on Facebook over the weekend detailing some of the challenges and needs at his restaurant, located at 9 W. Lexington Ave. in downtown Winchester.

According to a press release issued Monday, the floors and walls of the 132-year-old building are shifting. This causes other structural issues and presents challenges in food preparation integrity, the press release said.

Atkins said the baseboards are loose, there are plaster issues and there are soft spots in the sub-floor, among other structural issues.

Bob Tabor opened the Engine House Deli in the building in 1984. Atkins, who worked at the deli as a teenager, took over the business and rebranded it as a deli and pub in 2015.

“I don’t want these repair issues to become so bad they create a dangerous environment or health concerns,” he said.

Along with the structural issues, Atkins said the business has outgrown the space needed.

“It is difficult to continue operating and move forward with future plans with the space we have here,” he said.

Atkins said the lack of space for proper food refrigeration and storage requires him to shop for fresh ingredients every day and avoid buying wholesale, which would be a cost-saving measure.

With plans to invest in another downtown location, 15 S. Main St., Atkins plans to move the deli and pub concept to the new location and change the current restaurant into a pizza pub.

The new building will “house a new scratch-made cuisine restaurant and craft bar with similar offerings to the current restaurant and adding additional entree plates featuring local meats and products.”

The pizza pub will offer a menu ranging from simple pepperoni, Kentucky-centric pies like a hot brown pizza to gourmet creations.

With all this in play, Atkins said he has made the difficult decision to close the deli and pub for three to five weeks to accomplish renovations, reconceptualization and basic upgrades.

“I knew going into this there are generations older than me and younger than me who are used to going to the Engine House with their parents or their friends,” Atkins said. “The building alone is a landmark and the restaurant is a legacy in the community. I can’t walk away from that.”

He is asking the community to support the project as well as make it possible to retain his staff of more than a dozen local employees through the shutdown.

A GoFundMe page has been set up with a goal to garner $30,000 in donations for the project.

Atkins said the employees have become like a family and have agreed to work through the shutdown, helping with construction, cleaning, renovations and administrative tasks during the transition. The employees will also have the opportunity to train for the new restaurant, according to the press release.

“Outgrowing our space is a good problem to have,” he said. “But that wouldn’t have been possible without the crew we have there. Some of them have been with us since we opened two years ago.”

The Engine House Deli + Pub will close at the end of business June 10, following the Beer Cheese Festival and dinner accompanied by a show from local band “Beggars and Choosers.”

“Regardless of the GoFundMe and regardless of what we are able to accomplish, I can’t thank the community enough for the support,” Atkins said. “It sounds cliche, but the support is really heartwarming and it makes the long work weeks worth it.”

As of Monday evening, more than $1,900 has been raised via the GoFundMe site. At gofundme.com/save-the-engine-house-deli-pub, a bulleted list of needs and plans, along with the video message from Atkins can be found.

Awards given at chamber banquet Thursday

About 250 people from Winchester’s business and civic communities came together Thursday for the annual Winchester-Clark County Chamber of Commerce... read more