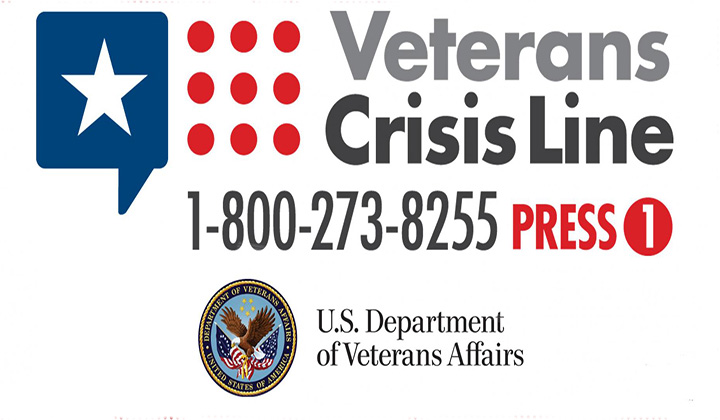 An average of 22 veterans die by suicide each day, according to a 2016 report from the Veterans Affairs Office of Suicide Prevention.

The risk for suicide among veterans is about 21 percent higher than the average U.S. citizen. 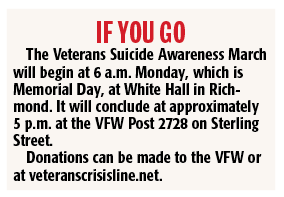 On Memorial Day, a group of people concerned about these statistics will march to raise awareness about the issue of veteran suicide and support the Veterans Crisis Line.

Justin Williamson said more than 50 people have committed to a 22-mile march from White Hall in Richmond to the VFW Post 2728 in Winchester. Some participants will also carry 22-pound rucksacks, which are a type of backpack.

The Veterans Suicide Awareness March will begin at 6 a.m., travel down Kentucky 627 across Bypass Road, onto to Lexington Avenue to Main Street and end at Sterling Street, where the post is located, at approximately 5 p.m. Monday.

The group will include active National Guard members and non-service participants, he said.

“We have no name or organization title,” Williamson said. “This isn’t a National Guard-sanctioned event. It’s just a group of people who see the rates of veterans suicide as a problem, and we want to get the word out there.”

He said the group is asking for donations to the Veterans Crisis Line through the march.

The Veterans Crisis Line is affiliated with the National Suicide Prevention Line, which provides free and confidential emotional support to people in suicidal crisis or emotional distress 24/7.

This line is specifically for any person who is serving or has served in the military, Williamson said.

“The line connects with chaplains, life counselors, psychiatrists and therapists who can help with people who are dealing with depression, anxiety, post-traumatic stress disorder and other issues. They can connect them with financial assistance for care,” he said.

Williamson said he has seen the hotline work in veterans’ lives.

“I have about five active duty National Guard friends who have used the hotline and I believe it saved their lives,” he said.

Williamson said the group is cognizant of the fact the march could come off as a protest, but he stressed the event is all about raising awareness.

“This is a public display of our support for veterans and to get people to recognize that this is an issue,” he said. “It’s a problem. It really is. We don’t know how to fix it, but we certainly know how to tell people about it.

“Memorial Day is a day for veterans and active duty military to remember people who have their life in service,” he said. “Whether that was done in combat or not, these individuals signed the dotted line to do that. Things got tough, they didn’t get the help they needed. But I believe they should still be honored as honorable service men and women.”

While more than 50 people have confirmed participation, Williamson said the “more the merrier,” for the march.

To learn more about the march, visit facebook.com/events/1523753511030192. For more information on veterans suicide prevention resources or to donate to the cause, go to veteranscrisisline.net.