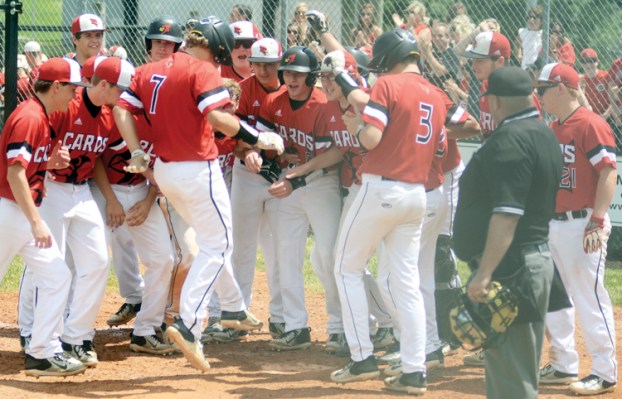 CYNTHIANA — The George Rogers Clark baseball team had not managed a hit against Bracken County’s Brady Jones when Bo Billings came to the plate in the fifth inning of the 10th Region Tournament Monday.

Billings broke up the no-hitter and the shutout with a home run to left-center.

That run only cut the lead to 3-1, but the Cardinals roared to life from that point, rallying for a 11-3 win and advancing to the semifinal round Tuesday night.

The rally in the fifth tied the score and GRC exploded for eight runs in the sixth.

The Polar Bears built their lead thanks to a solo home run in the top of the third inning, an RBI single in the fourth and a run-scoring double in the fifth.

GRC struggled against Bracken’s Jones. Even when the Cardinals squared up a pitch, it was right at a defender.

That changed in the fifth after Billings took Jones deep.

“(Billings) did a great job,” Ginter said. “He started us off. At that point we still had no hits. He ruined a no-hitter and a shutout all in one swing.”

The next batter, Brady Crowe, reached on an error. He advanced to second on a wild pitch and was awarded third when Jones balked.

Puckett cut the lead to 3-2 with a sacrifice fly.

Jaxson Davis hit the next pitch over the left field wall and the game was 3-3.

Tyler Walton had a big sixth inning for the Cardinals. He led off the inning with a double. That chased Jones, who finished with two earned runs on three hits in five innings of work. He struck out three and walked none.

Ware doubled off his replacement, Tad Fisher, to put runners on second and third. Brady Turner was intentionally walked.

That brought Billings back to the plate. He worked a five-pitch walk for the go-ahead RBI. Crowe followed that with a hit through the drawn-in infield to score a pair.

Puckett was hit by a pitch, which loaded the bases again. Cameron Dove drew a two-out walk on four straight pitches to make it 7-3.

Walton capped his stellar inning by hitting the first pitch he saw over the right field fence for a grand slam — his second in the post-season and third home run in as many games.

Ben Barrett worked a perfect top of the seventh to close out the win.

Back pitched 4.2 innings allowing three runs on five hits and three walks. He struck out four.

The Cardinals had hoped to score big earlier to keep Back rested for later in the tournament.

“The pitching part didn’t go the way we wanted it to,” Ginter said. “But you have to win the first one to get to the second one.”

Ginter said the Cardinals could look to Barrett again tonight, Caden Easterling or a combination of both.

Walton had a two-hit game to lead the Cardinals at the plate with four runs knocked in.

The season ends for Bracken County (18-13). The Cardinals improve to 21-9 and turn their attention to Bishop Brossart, who defeated Nicholas County in the tournament opener Monday, 7-4.

The Cardinals will face Bishop Brossart tonight at 5:30 at Harrison County High School. Harrison takes on Bourbon at 8 p.m.

The winners of those games will square off at 6:30 p.m. Wednesday.

PARIS — It took a while for the Cardinals to finish off the 40th District Tournament championship game, but the... read more