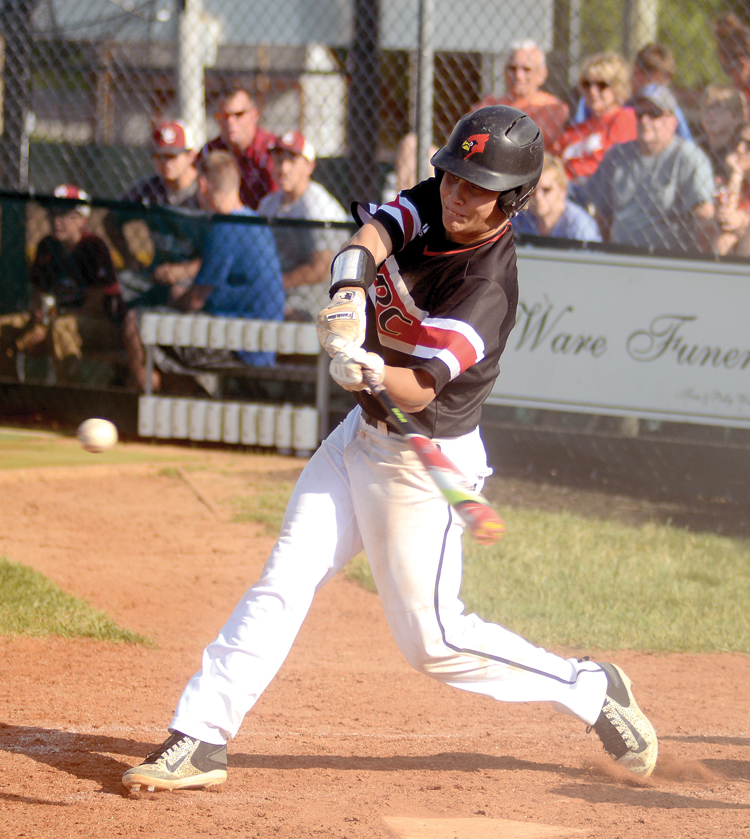 CYNTHIANA — It would be hard to say a 10-4 final hinged on a single at bat Tuesday in the semifinal of the 10th Region Tournament.

But Jake Ware’s plate appearance in the bottom of the fourth came with the George Rogers Clark High School baseball team nursing a 3-2 lead over Bishop Brossart. With the bases loaded and two outs, Ware saw nine pitches.

Ware fouled six of those pitches, including a pop-up that seemed destined to be the third out of the inning. Brossart pitcher Bryce Kremer couldn’t make the play, giving Ware new life, which the junior used to hit a long drive over the center field fence for a grand slam.

That extended the lead to 7-2 and gave the Cardinals the breathing room they wanted.

“Baseball is a game of luck sometimes, but that was probably one of the best at bats of the year,” GRC coach Matt Ginter said.

GRC hopped out in front when Tyler Walton drew a two-out walk in the bottom of the first and Ware doubled to put runners on second and third. Caden Easterling singled to drive in Walton and Ware scored on a wild pitch.

The Mustangs got a solo home run in the top of the second to cut the lead in half.

Walton got that run back with a solo homer of his own in the bottom of the third.

For Walton, it was more of the same for his postseason power surge. His home run Tuesday was the fourth in as many games.

“You get one your junior year then you have three or four,” he said. “He’s hitting the ball solid and the ball is carrying for him really well.”

The Mustangs put the pressure back on GRC with a sac fly in the top of the fourth, setting up Ware’s dramatic long ball later.

Ben Barrett and Bo Billings had a combined effort on the mound. Barrett, who closed out Monday’s win, went 3.2 innings allowing two runs on six hits and one walk. Billings went 3.1 innings, also giving up two runs on four hits. He allowed one base on balls and struck out four.

“They were big,” Ginter said. “We were looking for around 15 outs from Ben and he did what he needed to do. We brought in Bo, and we got some runs to give us a cushion.”