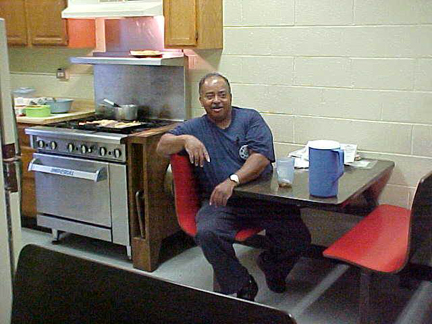 Paul Bruton spent more than 20 years as a firefighter and engineer for Winchester Fire-EMS. He passed away Monday. (Photo submitted)

Paul Bruton was many things.

He was a career firefighter and engineer for Winchester Fire-EMS. He delivered flowers for the Flower House. He was a skilled chef, a straight-faced storyteller and a prankster.

“Normally he drove the truck,” Winchester Fire-EMS Chief Cathy Rigney said. “He was a solid engineer. You never had to worry about getting water if Paul Bruton was on the truck.”

Bruton retired from the fire department in 2002 after more than 20 years. Former fire chief Danny Castle said he was one of several firefighters who were fired, and later rehired, following a strike in 1976 over working conditions and pay at the department. The only ones left, Castle said, were the chief, assistant chief and training officer.

Bruton returned in 1982, according to city records, and spent most of the time running the truck and cooking on his shift.

“Paul could cook but he was slow,” Castle said. “He came in one morning with a half bushel of apples” and said he was making apple butter. For the entire day, Bruton peeled and cooked apples.

“Around midnight, we put a pan of biscuits in” and started eating, Castle said.

Rigney said Bruton usually fixed breakfast and dinner on his shift. If there was anything left, the next shift had leftovers for lunch.

“When you asked what his secret was, he’d always smile and say it was cooked with love,” Rigney said.

Those who worked with Bruton had their favorite meals.

“I always liked his potato soup,” said Fire-EMS administrative assistant Janet Hackworth. “That was the only day I ate down here.”

“My daughter said he made the best meatloaf, bar none,” Castle said.

After he retired in 2002, Bruton would keep in touch with the firefighters.

“Even after he retired, at any function we had, he’d show up,” Rigney said. “He didn’t put his 20 (years) in and go. If he saw the guys sitting out, he’d swing in and visit.”

Bruton was well-known throughout Winchester, and he knew the town just as well. It paid off on fire scenes, not only from knowing the streets and house numbers, but also from knowing the residents or neighbors to find more information, Rigney said.

It could be a challenge in other situations.

“If you went to the store with him, plan on two hours,” Rigney said, while Bruton chatted with people.

That affability also paid off around the station.

“He was a guy you wanted to be around,” Castle said.

Bruton was one of the veterans when Rigney joined the department as part of the merger with the ambulance service.

“As a rookie coming in, he was very nice to me and had the utmost patience with the new guys,” Rigney said. “He would always make you laugh. It seemed like his timing was always great. If you needed (a laugh), he was always there to give you one.”

The Kentucky Transportation Cabinet has installed new signs across Clark County in an effort to make motorists more aware of... read more