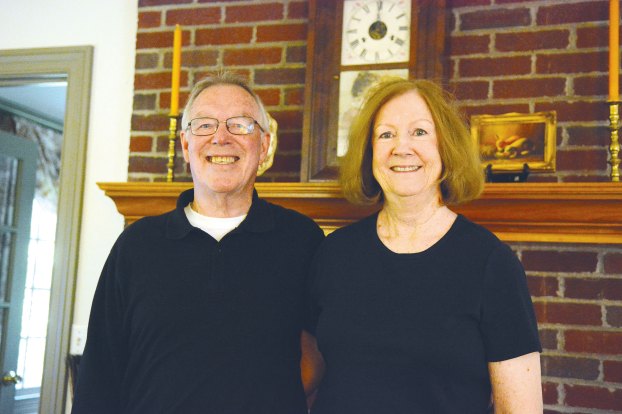 Mike and Rachel Reed pose for a photo in their home on Old Boonesboro Road. Mike has been a Winchester pharmacist for more than 50 years, working for the company that became Rite Aid. (Photo by Seth Littrell)

Mike Reed has seen the evolution of the pharmacy business in Winchester since he arrived in 1967.

At that time, Reed was a pharmaceutical student at the University of Kentucky, following in his father’s footsteps.

Reed eventually took a job working for Begley Pharmacy, located at 28 N. Main St. across from Leeds Theater. Reed and his wife, Rachel, moved to Winchester from LaRue County so he could take the job as he finished his studies.

“I had only been to Winchester once before,” Mike Reed said. “I went once as part of a field trip to Natural Bridge, and that was the only time.”

He said the old pharmacy was small, and pretty typical for a small-town pharmacy of the time. It served the residents of Winchester until the completion of the Winchester Plaza, when Begley opened a second location.

“We had two pharmacies open for a year before they finally consolidated them and closed the Main Street location,” Mike Reed said.

It was while working at the Winchester Plaza pharmacy that Mike Reed learned that Rite Aid had bought out Begley in 1998.

“It was really just a name change,” he said. “They kept the location and they needed all of the people working there, so we just stayed on.”

In the early 2000s, Rite Aid constructed its current location off of the bypass, moving its employees there from Winchester Plaza. Mike Reed worked at the new location for several years before taking a partial retirement.

In that time, he said three big changes have taken place in the pharmaceutical industry that affect him. The first was the computerization of the job, with software replacing files and stacks of paper that were once attached to each prescription. Another major change has been the increased role third-party insurance is playing in the business.

“It used to be that people would pay up front for their prescriptions,” he said. “There were no copays.”

Finally, Mike Reed said the job of a pharmacist is becoming a lot more communal rather than individualized, with pharmacists and their teams working together for each customer.

Now Reed works as needed to fill in for the other members of the Rite Aid staff. He said he enjoys the work because he gets to help out the many friends he has made in his time as a pharmacist.

“I’ve created a lot of friendships over the years after working with so many people and they’re all wonderful,” Reed said. “It made work enjoyable, I was anxious to go every day. If I ever stopped fully that would be what I miss the most.”

And Mike said he isn’t sure he will be stopping anytime soon.

“I just take it day-by-day, month-by-month,” he said. “As long as I can contribute and they still want what little I can offer I will continue.”

One of the two men charged in a May 18 fight pleaded guilty to a reduced charge. Cody Jones, 26,... read more