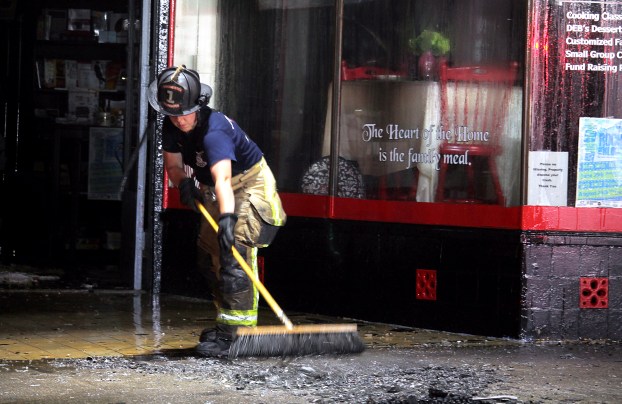 Winchester firefighter Melissa Parker cleans up shattered glass at the entrance of Heart to Home Services, located on the first floor of the building where an apartment was set ablaze Thursday.

Businesses pitch in to help clean up after downtown fire

Debra Parr sat in the back of Heart to Home Services Friday, with the only light coming from the open front and back doors.

Less than 24 hours earlier, a fire raged above her business.

Not knowing what she would find when she arrived Friday morning, the situation was less dire than she thought, thanks to her neighbors.

“I’ve been surrounded by the downtown businesses,” she said. “They showed up and helped me get everything for today done.”

A couple doors down Main Street, Dirty South Pottery was closed with a sign in the window saying, “Due to smoke damage, we will not be open Friday … We are in the neighborhood helping clean up efforts from the fire.”

That included cleaning up the damaged ceiling tiles which covered the floor and helping things start drying out.

“The main thing was getting the inventory that’s still good boxed and out of the front room,” she said. “The floor was covered.”

Parr said her store would likely be closed for a while until repairs are made. She said she would still meet with people by appointment and would meet her catering obligations.

“It’ll be several weeks before the store opens,” she said.

Upstairs, workers were working through the charred apartments. Firefighters said the fire itself was contained to Apt. 5, which building co-owner Eric Sparks confirmed. The rest of the building received a lot of smoke and heat damage.

A Winchester man admitted to setting his downtown apartment on fire because he was tired of people stealing from him,... read more