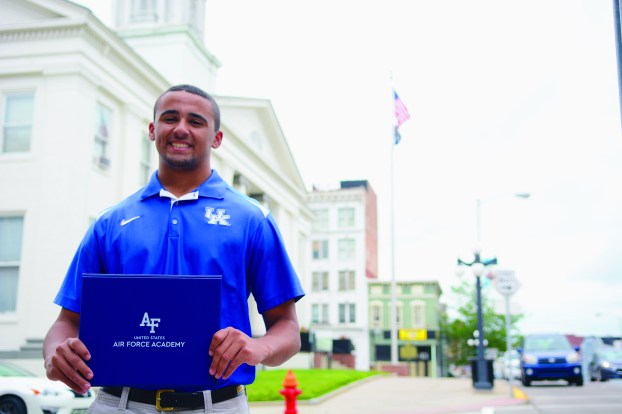 Chris Collins, who was recently accepted into the United States Air Force Academy, poses for a photo with his certificate of appointment. (Photo by Seth Littrell)

For recent GRC grad and governor’s scholar Chris Collins, getting a degree and working in a field he enjoys just isn’t enough.

“I want to support others and get support from others,” he said. “I want to be a part of something larger.”

Collins got his chance at something larger in February, when he learned that he had been accepted into the United States Air Force Academy where he will be studying aerospace engineering.

Getting his appointment into the academy was no small feat for Collins. It took eight months of hard work, including applying for consideration, writing several essays, taking part in several interviews with Air Force officers and having to get a letter of recommendation from a congressman.

The most difficult part of the process, Collins said, was getting a letter of recommendation from Congressman Andy Barr’s office. after submitting his request, Collins had to meet and interview with a panel of four Air Force graduates from Barr’s office.

“They asked me the basic questions,” he said. “Why do I want to be in the Air Force Academy, what can I do for the air force. The interview went well and I wound up getting the recommendation from his office.”

He said that many interview questions were aimed at testing his ideals and resilience, making sure that being part of the Air Force was something that Collins really wanted for himself.

Collins’ family has a rich military history already. His grandfathers and several uncles served in the armed forces, and he said a career in the military was always something he considered as an option growing up.

Collins didn’t begin seriously considering the Air Force Academy until his junior year though, he said. He described himself as a thrill seeker, and saw the Air Force as a way to combine the challenges he seeks out academically with his love of flying and the draw he has to public service.

He added his family and friends have been very supportive of him throughout the process and have helped him achieve his goals.

In addition to studying engineering, he would like to become a pilot and join the Wings of Blue parachute team, he said.

Sports and other physical activities are required of every cadet at the academy, Collins, a former football captain for GRC, said he is considering playing football for the academy, but he may also opt to join the wrestling team.

While attending the Air Force Academy does require several years of mandatory service, Collins said he thinks he would like to make the Air Force his career upon graduation, staying in longer than the time required of him.

The Air Force Academy is a university that operates as part of a military organization, according to the academy’s website. The cadets who are competitive enough to be appointed to the academy attend classes and training under a very structured schedule. The academy maintains a 4,400 body of cadets with more than 300 Air Force and civilian personnel.

A mild 2016 winter may mean an increase in ticks in Kentucky this summer. According to University of Kentucky entomologist... read more