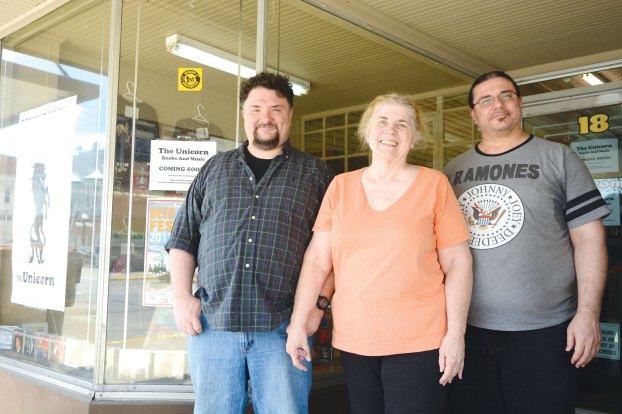 Judy Ferrara, with her sons Chuck and Nick Ferrara, pose for a photo outside of The Unicorn books and music, which will open to the public Saturday. (Photo by Seth Littrell)

Winchester residents headed downtown Saturday for the Beer Cheese Festival will have a chance to be the first customers at a new music and book store opening on North Main Street.

For the owners of The Unicorn, Judy Ferrara and her sons Chuck and Nick, the store is a culmination of their lives’ work and passions. All three are musicians and avid readers. They have worked for national book and music retail chains, and in the world of journalism as well.

“We’re renaissance people who are living in the wrong era,” Judy said.

The family originally hailed from Chicago, but moved to Kentucky from Texas. Judy said the three of them were looking for the ideal place to open a store where they could sell some of the items they’ve collected over their lifetimes.

The family looked at opening their store in Paris, but when they saw the historic building at 18 N Main St. they knew Winchester was where they wanted to be.

“We just like the look of it,” Judy said.

She said that, to her knowledge, The Unicorn will be the fourth business to ever be located in the space. It previously served as the location of Graham’s Boots and once was the location of a general store downtown.

The Unicorn will buy and sell books and music, Nick said.

The store will feature a variety of genres of both media, but Judy said that the collection on opening day will contain a lot of fantasy and science fiction books. Music will consist of records and CDs, with a variety of punk rock, heavy metal, jazz, classical and more options.

The family is still in the process of building more shelving units and cases to hold a wider variety of books and music they will bring in once completed.

The store will also feature a section focusing on the Civil War, as all three of the Ferraras worked over the course of a decade as Civil War reenactors, Judy said.

The Ferraras said they have not settled on what The Unicorn’s regular hours of operation will be yet.

However, the store will be open for the duration of the Beer Cheese Festival Saturday for people to stop in and browse the collection.

Detectives are investigating a pair of thefts involving a total of $56,300 and a dozen firearms. The incidents were reported... read more