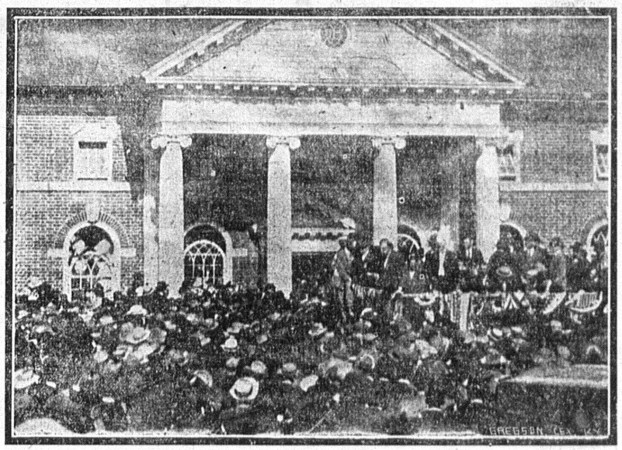 While researching Winchester’s early theaters in local newspapers, I came upon numerous unrelated but eye-catching tidbits.

It never fails. If you start scanning old papers on microfilm, you may not find what you were searching for, but you will certainly see items that grab your attention and make you stop to read. I hope you will find some of these as interesting as I did.

— In 1907, a local jeweler, Bowen & Whitehead, placed an ad in the Sun-Sentinel with the heading “Swastika — A Sign of Welfare.” Reportedly found “among the relics of all ages,” the swastika “has been considered as a talisman, a charm to drive away evil and bring good luck.”

The word comes from Sanskrit meaning conducive to wellbeing or auspicious. The symbol was indeed used in many Asian, European, African and North American cultures, and took on different meanings at different times and places. It found a popular use in the early 20th Century on jewelry, especially rings, pendants and stickpins. According to Bowen & Whitehead, “It is the very latest fad.”

The swastika quickly went out of fashion after it was adopted as the symbol of the Third Reich in Nazi Germany.

— The year 1908 brought a whistle-stop visit to Winchester by presidential candidate Judge William Howard Taft. His train stopped at Union Station Oct. 15. I have often heard people talk about President Harry Truman’s visit here in 1948, but no one ever mentions Taft. (Of course, almost no one alive here today was born before 1908.)

More than 3,000 people turned out to greet Judge Taft. Local Republican dignitaries escorted him from the train to a platform erected for the occasion in front of the depot, where he addressed the crowd. After a brief speech, he left on the campaign trail and was elected to office in November.

Weighing in at over 330 pounds, Taft is said to have been our largest president. There is an old wives tale that he started a diet after getting stuck in a White House bathtub — most recently mentioned in the June 5 issue of Time magazine. Taft did, in fact, install a super-sized tub in the master bathroom at the White House. The rumor probably began from there and was gleefully spread by his political opponents.

— I was briefly mystified after stumbling on the following headline in the Sun from Sept. 2, 1940: “Roosevelt Train Due In City Early Tuesday En Route To Capital.”

Why had I never heard of this? The paper announced that F.D.R.’s itinerary included a stop at Union Depot. Alas, the 200 people who showed up at the station at 1:55 a.m. did not get to see the president. He was fast asleep during the whole 40-minutes it took to check the train and shunt it from the L&N line to the C&O for the trip back to Washington.

Early in his career Hart built stone chimneys in this area. His last was for a Mr. Horton in Flat Rock, Bourbon County.

Hart cut his name on every stone in that chimney. Asked why he did it, Hart replied, “The day would come when they would know [me].”

He went to Lexington to work in the shop of Pat Doyle at the corner of Upper and Second Street, where Hart worked, ate and slept.

John S. Wilson, a druggist with a shop nearby, recognized his skill and helped Hart launch his career as a sculptor. His genius was recognized after he carved a bust of Chief Justice George Robertson. “It only lacked breath to be Mr. Robertson.”

His next model was the Honorable John [J.] Crittenden, “which was perfect.”

He then took a cast of Henry Clay and left for Florence, Italy, where he carved three life-like statues that sold for $10,000 each. Hart spent 21 years working on his masterpiece, “Woman Triumphant,” rendered in Carrara marble. The piece stood under the bell tower of the Fayette County Courthouse and received the admiration of thousands.

In 1897, a fire broke out in some waste paper and trash. When the blaze reached the cupola, it burned through the timbers supporting the bell, which fell on the statue crushing it to pieces. (My apologies to Joel T. Hart scholars if some of Mr. Murphy reminiscences prove inaccurate.)

— There is a delightful sequence of stories in the 1913 Sun about Professor Herman D. Kline, “Psychic Medium and Clairvoyant.” He installed a chair at 101 Highland St. and gave personal readings for as little as 50 cents. He inserted daily ads in the paper claiming that “a true clairvoyant is born not made” then offered “an honest proposition:” He guaranteed there would be no charge “if I fail to tell your name” and anything “you wish to know concerning business changes, love, marriage, divorce and [whether] your sweetheart is true or false.” The subjects upon which he promised “infallible advice” went on for two more paragraphs.

He announced his hours were 10 a.m. to 8 p.m. seven days a week. Less than a week later, the newspaper reported, “Whereabouts Of Clairvoyant Are Now A Mystery.” It seems he left an empty suitcase and some dirty clothes in his room at John A. Bishop’s boarding house on Maple Street and absconded.

The paper said that “he made many friends by his genial manner and honest appearance. He saw 75 to 100 people at his headquarters the night before he left town.” There was suspicion that many left money or valuables with him, and at least one person filed a formal complaint. The police speculated he had taken the night train to Cincinnati. Three days later, a report came from Mt. Sterling that a flim-flam man had victimized many people there a few weeks before. That self-styled clairvoyant had made the same claims under the name “Professor Harry A. Swell” and had “departed by the light of the moon.”

— A 1925 article in the Sun described the unveiling of Chief Justice James Simpson’s portrait at the state capitol in Frankfort. Judge J. M. Benton of Clark County delivered the portrait on behalf of the family and gave a brief biographical sketch at the event.

Simpson was born in Ireland in 1796, came to Winchester with his parents as a young man, was admitted to the bar in 1817 and rose “immediately to a front place in his profession.”

He represented Clark County twice in the legislature and was appointed to the Kentucky Court of Appeals. After the office became elective, he won a seat in 1851 and served as Chief Justice. The Court of Appeals was then the highest court in Kentucky. Opposed to “electioneering,” he was defeated for the seat in 1860. Judge Simpson died in 1876 and is buried in Winchester Cemetery.

His portrait no longer hangs in the capitol and could not be located by staff at the capitol or the Kentucky Historical Society. A portrait of Judge Simpson — possibly a copy — hangs in the second floor courtroom at the Clark County Courthouse.

Give those Grayson kids some kudos!