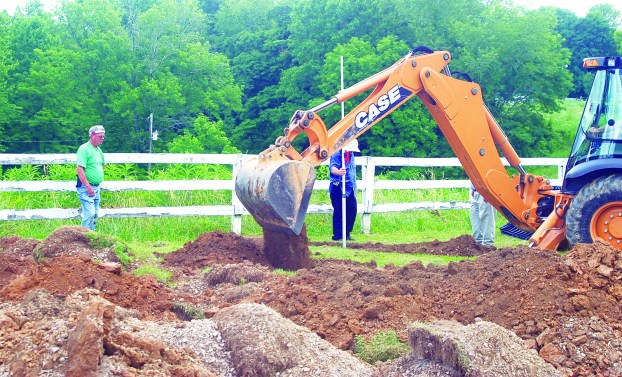 Work on a new water treatment system for Boone's Creek Baptist Camp should be completed by the end of the week. (Photo by Fred Petke)

With summer campers a short distance away, a group of local men sweated in the rain to make the Boone’s Creek Baptist Camp a better place for years to come.

A group of volunteers, with the help of several local businesses, began work Monday to replace the camp’s water treatment lagoon with an up-to-date system partially donated by Infiltrator Systems.

Frank Johnson, a member of one of the 36 Baptist churches in the Boone’s Creek Baptist Association, said all the labor equipment and materials were donated for the project, which will serve the camp and the adjacent Corinth Baptist Church on Wills Rupard Road.

“Our thought was for the next generation,” Johnson said. “We need to leave a better system.”

The lagoon system was installed in the early 1960s. As parts deteriorated, it began to require daily maintenance to make sure it worked properly and treated the wastewater before it was released into the creek.

The new system will include two 1,500-gallon tanks and about 500 feet of chambers to help dissipate the water, he said.

Paying for such a system would cost at least $20,000, Johnson estimated.

Johnson said Infiltrators donated part of the system and Ray Watson of Watson Construction would cover the rest. Cantrell Supply also donated some of the components and parts. Workers on the site also donated their time, equipment and labor, including a backhoe operator from Estill County who brought his own backhoe Tuesday, he said.

If the weather holds, Johnson said they should be finished by the end of the week.

The camp itself opened in 1954 and became part of the association’s permanent mission in 1955, according to the camp website. The land for the camp was purchased in 1956 and construction began the following year.

The door opens at Clark County Community Services on a Wednesday morning and Melissa Dean is sitting at the front... read more