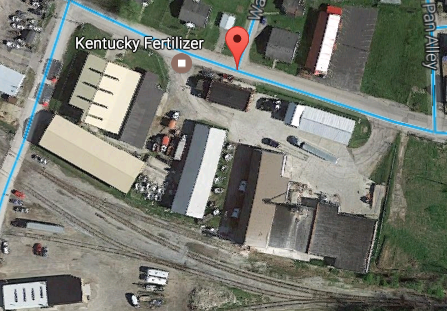 Residents of Hill Street, Mutual Avenue and others surrounding a fertilizer plant say they are sick of the smell from the facility.

Tuesday night, nearly two dozen residents presented the Winchester Board of Commissioners with a petition and asked for the city’s help with the situation and concerns about odors and dust from the Kentucky Fertilizer facility on Hill Street.

“I’ve had a cold and I can’t get rid of the cough,” said Hill Street resident Carol Hisle. “These people have had trouble breathing. There’s lime that goes in these pipes. There should not be a smell coming from it.”

Many said they can’t be outside any more.

“You can not sit on your front porch,” said Shelby Ratliff, who has lived on Melbourne Street for 26 years. “The noise is bad enough. The smell is worse.”

The fertilizer plant has been on Hill Street for decades, as have many of the people who spoke to the commission Tuesday.

“Everything we use is organic,” Masters said.

Winchester Mayor Ed Burtner said the planning and zoning commission, as well as the city commission, approved a rezoning request from Kentucky Fertilizer for a couple adjacent lots within the past several months for an expansion. Following an expansion at the plant, Burtner said he began receiving complaints about odors from the plant.

Masters said the plant has met all regulatory requirements from the Kentucky Department of Natural Resources, which has jurisdiction over air quality.

“We want to be a good neighbor,” he said.

Until recently, the plant was just that.

“The fertilizer plant didn’t bother us until they built this thing,” said Jay Griffett, who has lived on Mutual Avenue for 64 years.

Burtner said he spoke recently to a DNR inspector who said there are no issues with the plant and it meets state regulations. Still, Burtner said he would request a DNR official and Masters to attend a future commission meeting, along with neighborhood residents, to discuss the matter further.

Fairholme subdivision streets to be paved

City officials were ready to take action to pave the streets in the Fairholme subdivision, but didn’t have to. One... read more