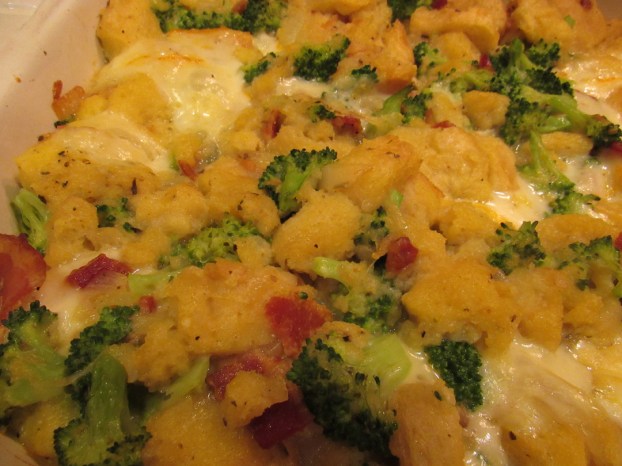 Nailed it or failed it: Casserole a hit at Sunday morning fellowship

After looking through my breakfast recipe folder, I decided to make this breakfast casserole for a Sunday morning fellowship at church. Everyone was to bring a breakfast item, gather in the Fellowship Hall and socialize before Sunday School began.

I decided I would double the recipe because I figured we would have a good crowd for the fellowship.

I had time to plan and had all of the ingredients on hand. I decided to put this dish together Saturday afternoon. Instead of frying the bacon on the stove, I just did my usual by putting it in the oven. Of course, I cooked the entire package so Brad could eat what wasn’t needed for the casserole.

While the bacon cooked, I sliced up what I thought were two big sweet onions, washed and cut up the broccoli, cubed up the sourdough bread and cubed the cheese — I used Muenster.

When the first batch of bacon was crisp, I removed it from the oven and put it on paper towels to drain. I poured the bacon grease into my skillet and was ready to caramelize the onions. Two sliced onions filled the pan.

I put the lid on and let them cook; checking them often and stirring throughout the process. After 15 minutes, I removed the lid and let the onions continue to cook.

As they caramelized, they shrunk a lot and I began to wonder if I should have bought bigger onions. At this point it was too late to add more.

While the onions finished caramelizing, I started cooking the broccoli. This took no time at all. After three minutes, I drained the broccoli and set it aside.

By this time, the onions were beautifully caramelized and smelled so good. I removed them from the burner and turned off the stove.

I decided I would probably need a pretty big bowl to mix all of the ingredients together for this dish, so I pulled out the biggest one I have and poured in the basil, salt and pepper.

I used the back of the mixing spoon to crush the basil the best I could. Crushing dried herbs helps release the oils for better flavor.

Typically, when a recipe calls for eggs, they mean large ones, but extra large eggs were on sale when I grocery shopped, so that is what I had in the refrigerator.

Since extra large eggs are, in fact, a bit bigger than large ones I decided to just use nine instead of the 10 called for in the recipe. Why nine? I don’t know, it just seemed right to me.

After cracking each one individually into a small bowl and adding to my extra large mixing bowl, I beat them just a little then added the milk. I stirred all of this together then dumped in the bread cubes, broccoli and bacon.

I combined what I thought was everything and poured it into my 9×13 pan. I turned around to find the cheese on the cutting board. Instead of pouring everything back into the mixing bowl, I just sprinkled the cheese over the ingredients in the pan and mixed it in the best I could. I put a lid on the dish and placed it in the refrigerator.

Now, since I have had trouble getting eggy dishes done on Sunday mornings for my Sunday School class, I decided I would cook this dish before going to bed and then re-heat it in the morning before leaving for church.

After about four hours in the refrigerator, I put the casserole in the oven and set the timer. After 20 minutes, I uncovered it and baked it an additional 25 minutes.

When it came out of the oven it looked great. I let it cool a bit and then put it back in the refrigerator.

When my alarm sounded Sunday morning, I got up and removed the casserole from the refrigerator and turned on the oven to pre-heat. I figured the casserole would take 30 to 45 minutes to reheat and so I began getting ready for church.

When it was time, I put the casserole in the oven and finished getting ready.

After 30 minutes, the timer sounded and I check the casserole to see if it was hot. It was warm, but not hot. So I re-set the timer for 15 minutes and waited.

It was almost time to leave for church when the timer went off again. I checked the casserole to see if it was hot. It wasn’t. OK, so now what do I do?

Instead of letting it continue to not get hot in the oven, I decided to put it in the microwave and hope for the best. I covered the casserole and cooked it for a minute — still just warm. Two minutes — warmer, but still not hot. OK, one more minute — hot!

I put the dish in a basket and off to church we went.

When it was time to serve ourselves, Brad and I were toward the front of the line.

The first thing Brad put on his plate was this casserole. I didn’t get any because there’s not much in it I like.

When we sat down to eat, I only had to wait a few seconds for him to taste it and tell me it was good. He thought it wouldn’t hurt if I wanted to add a little more onion and bacon. If I ever fix it again, he said shiitake mushrooms would be good in it, of course.

Fellow Sunday School members sat with us during the time of fellowship and I noticed they had gotten some of my casserole so I waited for them to finish to find out what they thought about it. Kathy, Tom and Pat liked it and said they thought it had enough onion and bacon in it.

Warren, Pat’s husband, decided he would go back and get a little taste, but found out all of the casserole was gone.

When I went to get my empty dish, there were a few crumbs left and I asked Warren if he wanted to try it. He did and said it was good, but of course, it wasn’t hot by the time he took a taste.

The fellowship was a success and with everyone’s blessing, I’ll say I nailed this recipe. It’s headed to my self-made cookbook.

In a large skillet cook bacon until crisp; remove bacon, reserving two tablespoons of drippings in the skillet. Crumble bacon; set aside.

Preheat oven to 325 degrees. Bake covered casserole for 20 minutes. Uncover and bake 20 to 30 minutes more or until a knife inserted near the center comes out clean. Let stand 10 minutes before serving.

Enjoy the thrill of the grill safely

There is nothing that says summer quite like that tantalizing aroma of outdoor grilling. That is also a reminder there... read more