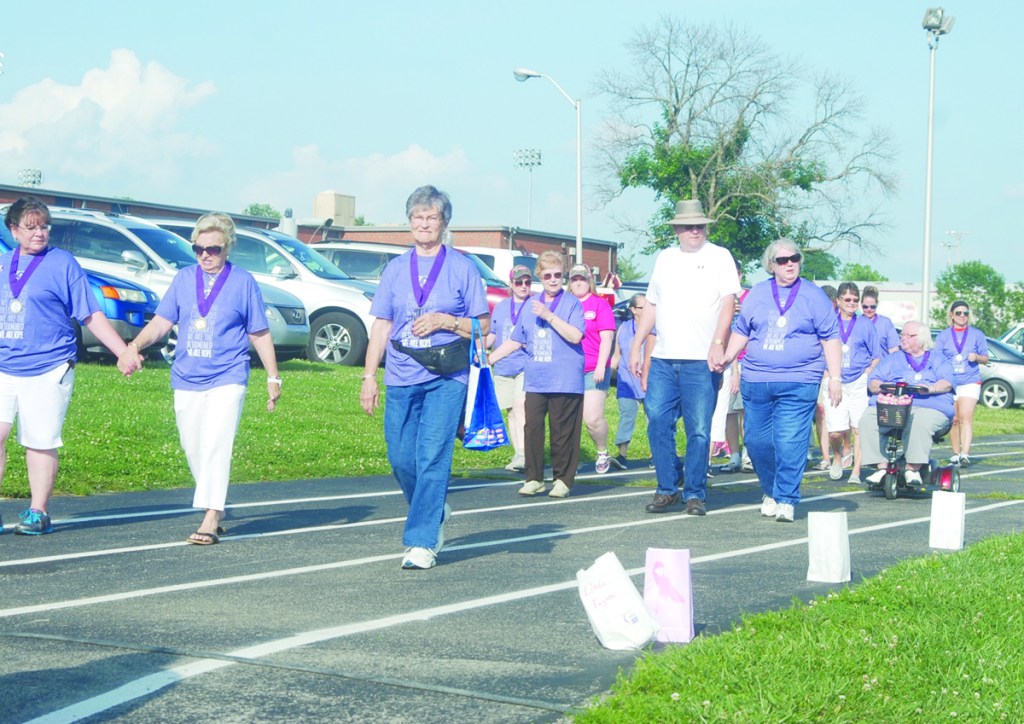 Cancer survivors walk the first lap of the track at Campbell Junior High School Friday evening to kick off the 21st annual Relay for Life. (Photo by Fred Petke)

For two decades, Clark Countians have gathered to celebrate cancer survivors, mourn those who lost their fight with the disease and to raise money for research.

Friday evening, teams and dozens of survivors circled the track at Campbell Junior High School with the goal of raising $77,000 for cancer research.

As teams prepared their booths with games and food, cancer survivor Dawn Alvarado, wife of state Sen. Ralph Alvarado, shared her story of living with breast cancer, which started three years ago following a routine mammogram. The check confirmed cancer in her right breast in March 2014.

“I was overwhelmed,” she said. “I thought to myself, ‘I can’t do this. My husband has a state senate race. My kids need me.’ In a short time, I realized I needed to prepare for a life-long fight.”

A short time later, Alvarado had a double mastectomy, which brought more bad news. The cancer was an advanced form, and she would have to start six rounds of chemotherapy.

Alvarado credits her faith, and those who prayed for her, for making changes in her and bringing her through.

“God has given me so many blessings,” she said. “He strengthened me to be more bold. (This) is a celebration of how God strengthened my faith.

“God did not plan this, but he allowed it. He has strengthened by faith to sight.”

Cancer, she said, knows no limits.

“Cancer … can touch anyone at any time,” she said. “I know if I skipped one mammogram, my prognosis would not have been as good.”

Alvarado then lined up with the other survivors to receive their medallions and to walk the first lap of the track, which is reserved for cancer survivors, to the applause and cheers from team members.

The event, which carried a Dr. Seuss theme, wrapped at midnight.