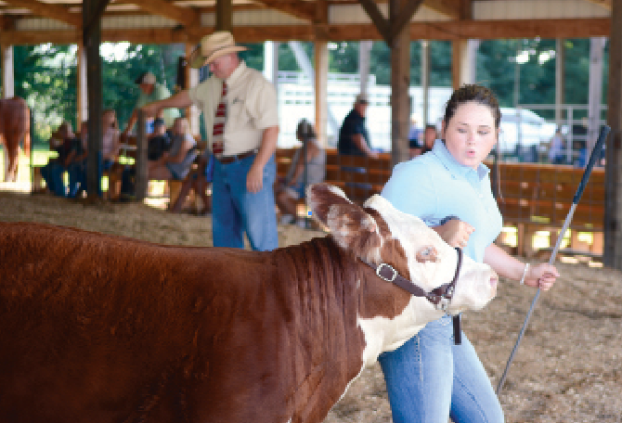 Cattle farmers from Clark County and abroad gathered at the fairgrounds Saturday to show their livestock at the open beef show.

According to fair board member Karen Mattingly, the show draws cattle farmers from various locations, including as far away as Ohio and Indiana.

“Anyone can participate,” she said.

The event was judged by Indiana cattle farmer Loran Wilson, a former president of the Indiana Beef Cattle Association. Wilson spoke with each of the contestants in the show individually during the event, as well as educating all who were

gathered to talk about the criteria he uses when examining cattle. He said part of the importance of beef shows at county fairs is that they offer a way to introduce children to the cattle business and encourage them to explore it.

For the uninitiated, beef shows consist generally of two parts.

According to Mattingly, the first portion of the competition is dedicated to showmanship. This is where the participants lead their animals out into the ring, but it is they who are being graded.

“Showmanship is about the person showing the animal and how well they can control it,” she said.

Wilson said when it comes to showmanship, the biggest thing he looks for is whether or not the person showing the cattle is focused on the animal’s presentation, or just watching the judge to see what he or she wants. He said the first thought in every contestant’s mind should be what the best way to position the animal is in order to show it off.

“I’ve seen people who are so focused on looking at the judge to see what he wants that they walk right into the steer that’s in front of them,” he said. “Be proud of your steer, and position him the way you would want me to see him.”

Following the showmanship portion of the competition, the focus of the beef show transitioned to the animals themselves, with several classes of heifer, steer, cow and bull being compared from various farms.

Mattingly said each judge in a beef show will look for different qualities in an animal, but largely the decision on which wins is based on how well they meet the requirements of thier class, both physically and considering their personality.

“It’s just like a pageant for people,” she said.

Saturday’s show included 39 classes, with a winner being chosen in each class. Of those winners, a champion was selected from each type of animal, and of the champions four supreme champions were picked, two heifers and two bulls.

For two decades, Clark Countians have gathered to celebrate cancer survivors, mourn those who lost their fight with the disease... read more