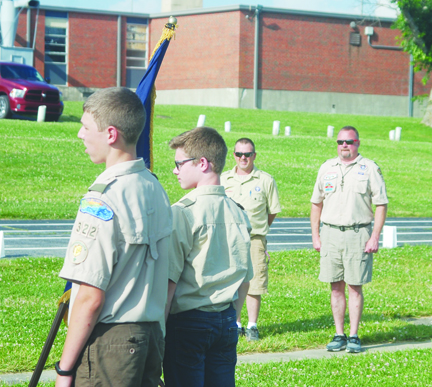 Boy Scout Troop 322 Scoutmaster Shane Pelfrey, right, watches as Scouts from his troop act as the color guard at the Relay for Life earlier this month. An Eagle Scout himself, Pelfrey founded the troop four years ago. (Photo by Fred Petke)

Troop 322 Scoutmaster Shane Pelfrey is on his second career with Boy Scouting.

The Winchester native was a Scout himself, starting in Cub Scouts and continuing all the way to earn his Eagle rank, the highest award in Scouting.

About a decade ago, he started getting involved again as his son Vance became old enough to start Cub Scouts.

“Mom and Dad put me in bright and early with Cub Scouts,” Pelfrey said. “I think I got away from it a little when I got out in the real world.

“When (Vance) was in Cub Scouts, my wife Kym was his den leader. I took over when he got to Boy Scouts.”

Now Vance is nearing his Eagle rank and Pelfrey is leading a troop of 11 Scouts, which he helped form about four years ago.

Pelfrey went through Scouts as a member of Troop 54 in Winchester, and started there with Vance. The troop, though, wasn’t the same and eventually dissolved, he said. Pelfrey started Troop 322, which meets at Winchester-Clark County Parks and Recreation.

“I wanted to do things the way (Boy Scouts founder Lord Robert) Baden-Powell wanted them done” with the boys leading the activities, he said. “In the meetings, the boys run the show. We’re there to advise.”

Leadership is one of the most important things Pelfrey gained from Scouting, and one he tries to instill among the boys in Troop 322.

“It was hard at first,” he said of getting the boys used to leading. “It’s to the point now the older boys are leading the meeting and teaching the others.

“The leadership I learned I wanted to pass on to them,” he said. “And being outdoors.”

Throughout the year, the troop takes a number of trips, mostly within the Commonwealth.

“The more I can get these kids outside and away from video games and the TV, the better they are,” he said.

One of the boys favorite activities is going caving, so there was a trip to Mammoth Cave last year followed by canoeing on the Green River, he said. Last year, they made a trip to Cumberland Gap in Bell County and hiked the Mischa Mokwa Adventure Trail.

“That was cool because it was the 50th anniversary”  and there was a special commemorative patch, he said. “When I was there (as a boy), I did the 25th anniversary and got the patch.” (Earning and collecting patches is a big activity among Boy Scouts.)

There was a trip to the museum at Wright-Patterson Air  Force Base in Ohio last year, he said, but it was the exception.

“There’s so much to do in Kentucky, we try to do a lot here,” he said.

There is a lot of fun, but Pelfrey sees part of his job as preparing boys for life.

“Hopefully (I’ll) see these young guys grow up, be responsible citizens with good leadership,” he said. “I can’t wait to see what my guys turn out to be. I’m here for them.”

The proposed Jimmy John’s location on Carol Road next to Cricket Wireless had some new signage installed Monday as workers... read more