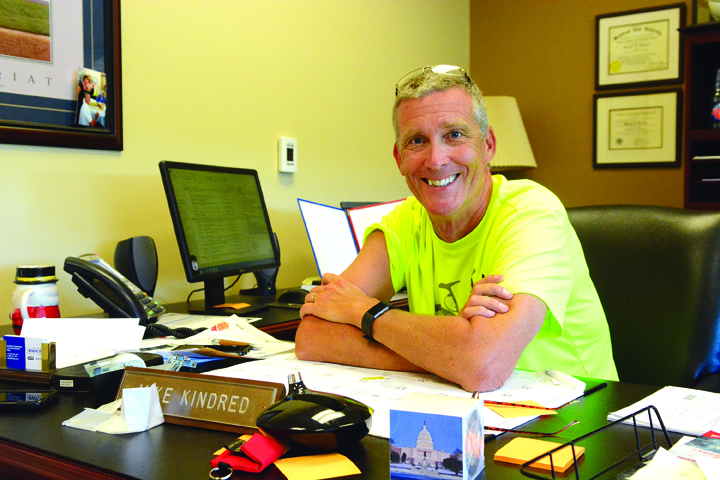 When Mike Kindred, principal of the Area Technology Center, retires at the end of July, he will be taking with him years of experience as an educator.

Kindred, a Clark County native, has been at the ATC since 2012. Before that he spent four years as the deputy, executive director for the Kentucky Office of Career and Technical Education in Frankfort.

Earlier in his career he worked as a teacher and basketball coach at several schools, including the University of Kentucky and University of Alabama.

“I’ve been around,” Kindred said.

Teaching is in Kindred’s blood. He credits his draw to the career as stemming from various members of his family.

“My grandmother taught here for 40-some years,” he said. “She taught at the old Fannie Bush School. She always talked about how Ms. Fannie Bush was like a second mother to her.”

His aunt, Frances Eubank, taught in the school system as well.

“We would actually sit in the classroom before we were even school age,” Kindred said. “It was just kind of a family atmosphere with those women.”

Kindred said he was also drawn to the job because he had a desire to start coaching after playing basketball in college.

Over time, Kindred said seeing how the economy has changed has reinforced his belief that the skills taught at ATCs are important for everyone to learn.

“It’s just vital that when a kid graduates high school now, they need to have a skill set,” he said. “If you look at the economy and all the baby boomers that are retiring, there just aren’t people there to fill those positions.”

Kindred said the skills taught at the ATC can benefit anyone, whether or not they become the bedrock of a career.

“Even if you want to be a doctor, that’s fine go be a doctor,” he said. “But if you can fix your own car, look at the money you can save if you can diagnose what the problem is.”

The Clark County ATC serves between 600 and 650 students a year.

Kindred said the hands-on aspect of learning at the ATC appeals to him and many of the students he works with. The ability to learn theory and then immediately put it into practice and see the result helps keep students excited about learning, he said.

“We don’t have a tremendous number of discipline problems and I think that’s why,” Kindred said. “The kids are engaged, the teachers do a good job of keeping them engaged, and they’re learning skills they know are going to be lifelong skills.”

Kindred said the staff of the ATC has helped make his time there enjoyable.

When he isn’t teaching, Kindred enjoys traveling with his wife and a group of people from their church. They have been to Washington, D.C., the Grand Canyon and Yellowstone National Park.

He also has what he calls “an obsession” with the military and military history.

In his travels, Kindred has met numerous World War II veterans, getting photos with them and listening to the stories they have to tell.

Kindred is also a volunteer with the Industrial Authority board and the Habitat for Humanity board.