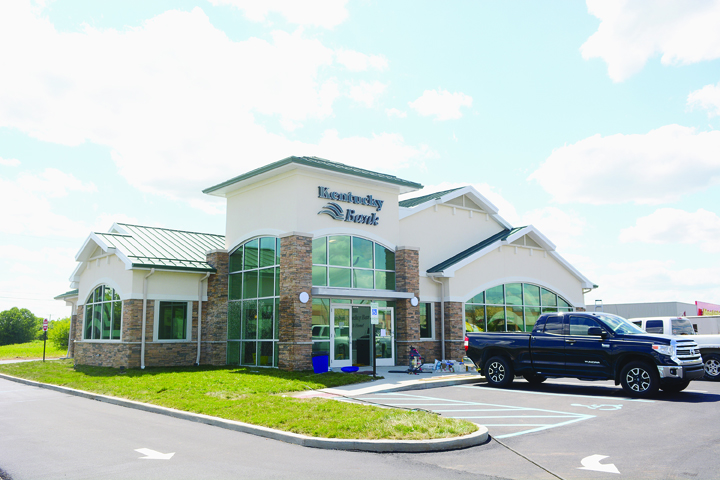 Kentucky Bank will open its doors to the public today at its new building on the corner of Bypass and Colby roads. (Photo by Seth Littrell)

The new Kentucky Bank building constructed at the corner of Bypass and Colby roads this spring will be ready to open to the public today, according to Market President Darryl Terry.

Terry said this week will be the location’s “soft opening” with a grand opening celebration planned for mid-July.

“When we designed this building, we were thinking about what the next 20 years of banking will be like,” Terry said.

The building features an open air design with a number of windows to allow natural light into the space. The walls are decorated with photographs from around Clark County by Paris photographer Bobby Shiflet of Frames on Main Gallery.

Terry said the building will light up at night, allowing viewers to look through the windows at the art on display.

The idea, he said, is to make the bank an iconic marker when someone enters Winchester coming from Colby or Boonesboro roads.

Contractors worked Monday afternoon on some of the finishing touches for the building, including trimming and watering the landscape to prepare for the opening.

Inside, employees were beginning to move in their items from the bank’s downtown office, which has been sold to CVS Pharmacy but leased by the bank for another year.

The branch is the first of two that Kentucky Bank is constructing in Winchester.

Terry said a similar, but smaller, building is also planned for Washington and Maple streets near Winchester Fire-EMS Station 1.

Work on that branch is expected to begin in July or August, Terry said.