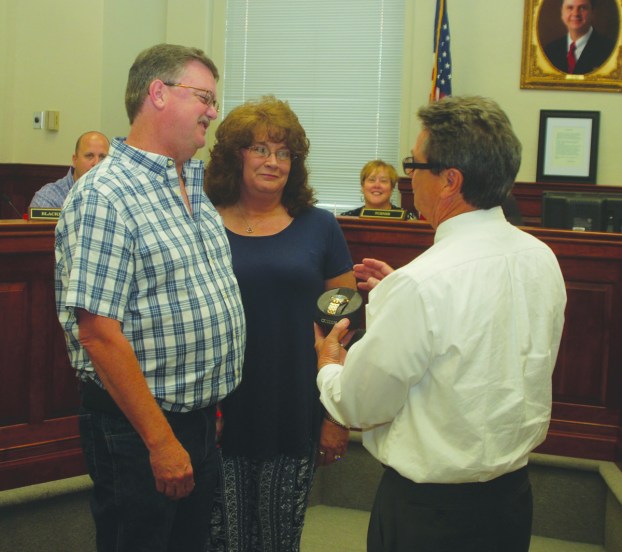 For Brian McCord, one event made him want to be a firefighter.

Though he and his friends played “Emergency!” as children, that wasn’t what led him to his career inspiration.

All it took was watching the fire at the Winchester stockyards more than 30 years ago.

“We lived in the neighborhood,” McCord said. I went down and watched and got hooked.

McCord was 18 at the time and had already been hanging around the fire station before he became a volunteer.

“Hugh Stamper was the chief at the time,” he said. “Vernon Johns was the assistant chief. I went down and started talking to the guys. I got into it and loved it.”

At the time, there were less than a dozen full-time firefighters at the county, and McCord said he was fortunate to get hired full-time when he did. There were plenty of experienced firefighters on hand to help with his training.

“We had a lot of good guys at the department,” he said. “They took me in and taught me. They told me what to look for. They’d watch out for you. They’d let you know what you were doing wrong.”

The fire department became McCord’s second home. Even when he wasn’t on his shift, he would often hang out at the fire station while his wife worked, he said.

“It’s more like a family,” he said. “You sit and you eat with the guys. You watch their kids grow up. I’ve always felt I have two families: my regular family and my fire department family.”

In McCord’s case, the two overlap. His younger brother Robbie McCord is a battalion chief at CCFD and his brother-in-law Chuck Steele is a former chief at Winchester Fire Department. His father Gary also volunteered at the department for a time, he said.

There has been plenty of change and development through his career. The department has grown from having 10 full-time firefighters to its current 23.

“When I got on, our biggest priority was running wrecks,” he said. “As the years went, we got more into (hazardous materials) and tried to help the rescue unit with searches.”

After the rescue squad dissolved, the fire department assumed those duties as well including rope and swift water rescue, among others. All firefighters are now required to be certified EMTs, he said.

“It’s stuff the guys wanted to get into to better (serve) the community,” he said. “Your technical rescue is more training on the year.”

McCord became an EMT before the ambulance service was as developed at is was, he said, just in case those skills were needed on a scene. Now, it’s a condition to be hired at the department.

McCord’s priority, he said, was to serve Clark County.

“It’s been enjoyable,” he said. “I enjoy helping people.”

No one was completely satisfied with the two proposed job grade systems for Clark County workers. The plan which was... read more