Nailed It or Failed It: Toffee recipe wins big at county fair 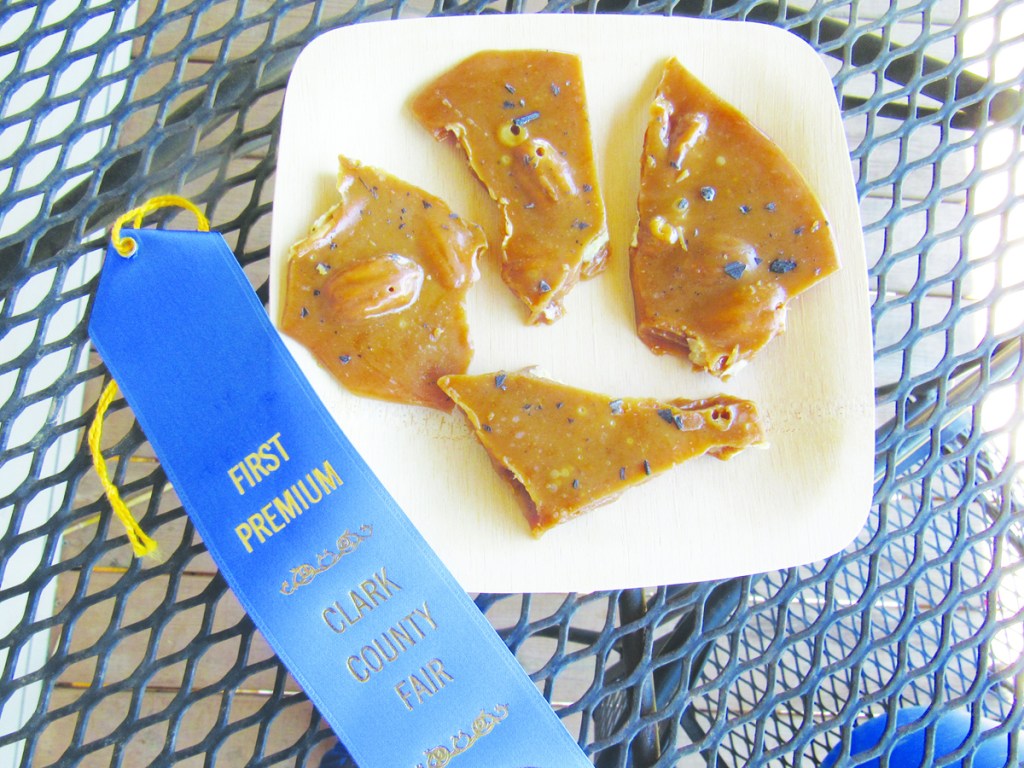 I  found this recipe at barefeetinthekitchen.com. I love toffee, but most recipes I find for it involve chocolate. The directions sounded fairly simple, so I decided it would be worth trying.

When I was reviewing the Clark County Fair catalog I discovered an entry category called Other Candy. Right then and there, I decided that was the perfect reason for trying this recipe.

In all my years of cooking, I’ve never been much of a candy maker. I always felt like it would take too much time, too much patience and perfect weather conditions to turn out right.

Fair entries were going to be accepted Monday morning so on Sunday afternoon, with a few clouds in the sky, I got busy making this recipe.

Since I’ve not made much candy and because the fair only required four pieces, I opted to just make half of this recipe because I didn’t want to waste pecans and the other ingredients in case it didn’t turn out right.

A few years ago, my cooking mentor, Bonnie Hardy, gave me a heavy duty pan she said was perfect for making candy. So I pulled out that pan, added the butter, sugar, water and salt.

I turned the heat on the stove to medium-high. While the mixture was heating up, I put my Silpat mat on a cookie sheet and spread the pecans on it. The butter in the pan was melting and I started stirring.

The author of this recipe made a few notes, one which said instead of using a candy thermometer to determine when the time was right to pour the hot mixture onto the pecans, to just have a paper bag sitting next to the stove. When the color of the toffee matches the color of the paper bag, it’s ready.

The recipe calls for Maldon salt, which is a brand of finely flaked sea salt. I don’t have any of that, but I do have black flaked sea salt so I sprinkled some of that over the top and stepped back. When I looked at the toffee, I was afraid I’d let it cook too long, it now looked darker than my paper bag.

By the way, another note from the author of the recipe was if you don’t have Maldon salt and you don’t want to buy the fancy salt, you can use coarse sea salt or even kosher salt – just be extra careful when sprinkling it on the toffee since smaller grains of salt can quickly turn something too salty instead of just giving it a hint of salt.

Instead of putting the toffee in the refrigerator to cool, I just let it sit on the counter. There wasn’t enough room my refrigerator for the cookie sheet.

When the toffee had cooled, I broke a piece off and tried it. Mmm, mmm, mmm, it was good. I had not burned it, it tasted great and it had just the right amount of salt on top. I love sweet and salty stuff.

I broke the remainder of the toffee into pieces and picked out four pieces to enter into the Fair.

Half of this recipe made a decent amount of toffee, especially since I knew I’d be the only person at our house eating it. I did share some of it with our neighbors. Rachel said it was spot on, but she wants more pecans in it next time.

After a couple of days, Rachel recommended storing the toffee in the refrigerator so it won’t soften and lose its crunch. Mine wasn’t around long enough to lose it’s crunch.

Not only did I nail this recipe, but it won a blue ribbon at the County Fair and the recipe is headed to my self-made cookbook. Christmas is six months away, and I think sea salt pecan toffee will make the perfect present for some of our relatives and friends.

In a heavy bottomed stainless skillet, over medium heat, combine the butter, sugar, water and salt. As the butter melts, stir a few times with a wooden spoon or spatula to combine. Bring to a boil and then don’t stir or touch the mixture again until it is caramel colored.

While the toffee is boiling, prepare a large baking sheet by lining it with parchment paper or a silpat mat (do not use waxed paper as it will melt). Scatter the pecans across the prepared baking sheet.

Once the toffee is caramel colored, remove from the heat and add the vanilla. Stir to combine. Quickly pour the toffee over the pecans. Sprinkle with Maldon salt. Let cool completely. You can sit the pan in the refrigerator to speed this process.

When the toffee is cool, break into pieces. Store in an airtight container in the refrigerator or at room temperature.