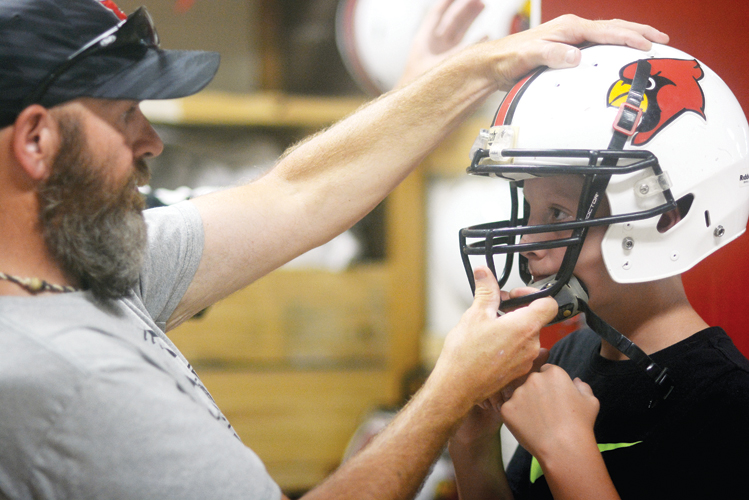 There will be a number of changes for the Campbell Junior High football team to adapt to this season, which began Monday evening with registration and equipment fitting at the school.

The Cardinals will be under the direction of first-year coach Richie Kiniry, compete in a new two-division conference format and start learning the system of new George Rogers Clark coach Oliver Lucas.

The first of those won’t be too much of an adjustment, as most of the Cardinals are familiar with Kiniry, who coached little league football for eight years, coached at Clark Middle for three years and enters his fourth year at Campbell.

He replaces Perry Williams, who stepped down as Campbell’s coach, but Kiniry and Williams worked closely together during his tenure. Kiniry assumed head coaching duties for a few games last season.

Now that he’s at the helm, Kiniry hasn’t changed the goals for the team that brought home a conference championship last year.

“Hopefully, we’ll make the playoffs and get to the championshup game with both teams. We’re also going to participate in the state tournament games.”

Campbell opted not to compete in state games last season because of the schedule of those games.

“The state games started before our season ended, so we were playing four or five games in a two-week period,” Kiniry said. “We thought it was too hard on the kids to play that much football in that short amount of time.”

The schedule has been changed this year, Kiniry said.

“Our season ends before the state games even start,” he said. “We’ll end on a Thursday and the state games start on a Saturday, so we’ll have one week where we might have two games in a week. After that, it would just be one a week.”

But before all that, the Cardinals still have to take care of business in the Bluegrass Conference, which has its own changes.

Previously an eight-team league, the conference now has 10 teams.

Teams played each other once for seven conference games, but the league will now have a two-division format, with five teams in each.

Campbell will play the other four teams in its own division and one of the five teams in the other division, which will count as a non-conference game.

“We’ll have a few fill-in games,” Kiniry said. “We play in a bowl game over at Madison Middle on Aug. 12 and we’re going to play Caudill Aug. 3.”

The Cardinals will be competing for conference titles and perhaps even state championships with some changes to the playbook.

“We’re trying to align with the high school,” Kiniry said. “The defense that he’s (Lucas) running at the high school, we’re going to try to run here. His offensive play is similar to what we ran here the past couple of years, except he words them different. We’re going to reword our plays to match his terminology.

“So, we’re trying to get on the same page so the kids will be more familiar when they get to that level.”

To help in that transition, the Campbell football coaching staff has expanded.

“We have the biggest coaching staff we’ve ever had at the middle school level,” Kiniry said. “We’re anticipating anything from 80 to 100 kids in the program this year so we have up to nine coaches, including myself. We’ve always operated on about six or seven. We added a couple coaches because of the number of kids we aniticipate.”

Kiniry doesn’t expect any of those changes to be a hindrance for his two teams going into his first season flying solo.

“The eighth-grade has a strong returning team,” he said. “A couple kids have moved in (to the district) that I think will really help us. Seventh-grade I don’t know a lot about them yet, but I do know we have an awful lot of good athletes. I’m looking for a real good year out of both teams.

“I hope we can continue the tradition we’ve kind of started here over the last three years.”

By Kevin Kelly Dept. of Fish and Wildlife